The signing took place as the U.S. celebrated the newly established Juneteenth holiday, commemorating the date when the last enslaved African-Americans were freed in 1865. 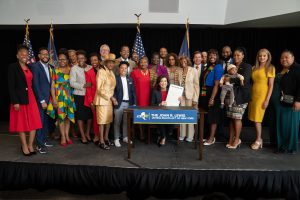 Juneteenth is a holiday commemorating the end of slavery in the United States.

It is also called Emancipation Day or Juneteenth Independence Day.

The John R. Lewis Voting Rights Act of New York, signed into law by Gov. Hochul, will make it easier to sue over discriminatory voting policies and require areas with a history of civil right violations to get approval before changing election rules.

“This is one of the most important bills to make it through the state Legislature in recent history, and it will deliver the strongest and most comprehensive voter protections of any state in America,” sponsor Assembly woman Latrice Walker, D-Brownsville, said during a ceremony at Medgar Evers College in Brooklyn.

The signing took place as the U.S. celebrated the newly established Juneteenth holiday, commemorating the date when the last enslaved African-Americans were freed in 1865.

Similar to a measure that recently failed to pass at the federal level, the voter protection bill will prohibit deceptive and suppressive voter practices, establish a voting and elections database, and make electronic election interference a misdemeanor.

“As always, when the federal government fails to act, you can count on New York to punch back and fight even harder,” Hochul said.

“No state in the nation has stood up with the courage and the conviction and the power that we have by protecting these important rights.”

The new law makes it so that most school boards or local election boards can no longer remove people from voter rolls, reduce voting hours or cut the number of polling sites without approval from the state attorney general’s office or courts.

It would also make it easier to sue over discriminatory voting policies like intimidation and suppression by laying out an expedited process for voters or the attorney general to file lawsuits over violations.

Groups including the New York Civil Liberties Union, the Brennan Centre for Justice and the Legal Defence Fund applauded Hochul and state lawmakers for ensuring the voting rights of all New Yorkers were fully protected.

It ruled that states with a long history of voter discrimination no longer needed to get approval from the Federal Government to make changes to election procedures.