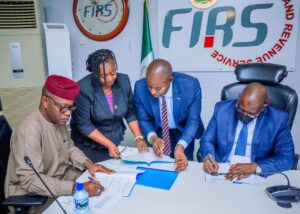 The Nigeria Export Processing Zones Authority (NEPZA) and the Federal Inland Revenue Service (FIRS) have agreed to adjust some sections of the recently signed Memorandum of Understanding (MoU) on effective tax administration, to accommodate some salient concerns.

The News Agency of Nigeria (NAN) reports that the agencies on June 7 signed the tax pact to reconcile grey areas in the administration on issues bordering tax deductions from free zones and enterprises operating in the zones respectively.

A cross section of the stakeholders had raised concerns on some sections of the guidelines that contravene some provisions of the NEPZA Act for operators in the free zones.

The agreement to adjust the MoU was reached on Wednesday during a formal presentation of the document to the stakeholders at a roundtable organised by NEPZA in Lagos.

Prof. Adesoji Adesugba, Managing Director, NEPZA, explained that the event was to make adjustments where necessary on how the FIRS and NEPZA would treat tax issues relating to business interactions within the free trade zone ecosystem.

He noted that Section 5 of the MoU had given parties the leverage to call for the amendment of the tax guidelines when necessary.

“The Authority’s recent diplomatic advances with sister agencies, especially, the FIRS can only be described as a game changer.

“We have always insisted that the free trade zone scheme must be allowed to succeed as that truly remains a potent economic instrument for widespread growth and development.

“Therefore, we have agreed to adjust the tax pact to capture some of the salient concerns of the stakeholders.

“The authority will not shy away from protecting the scheme and those who have invested billions of dollars in the scheme and we are delighted that the FIRS has become our advocate in this regard.

“We are also happy that the administration of President Muhammadu Buhari has given us the impetus through his favourable policies to deepen the growth of the scheme,” he said.

Alhaji Mohammed Nami, Executive Chairman, FIRS, said concerns of the stakeholders would be evaluated, adding that the document was a flexible guideline on how to administer the MoU.

Nami, represented by Mr Mathew Gbonjubola, Coordinating Director of the Service, noted that not all the concerns raised were genuine, saying that the FIRS was knowledgeable enough on issues around free trade zone tax administration.

Nami explained that the Service would not unduly interrogate tax remittances of enterprises with full status of free trade zones.

He further noted that all other issues raised on the tax pact would be addressed within two months.

On his part, Chief Toyin Elegbede, Executive-Secretary of the Nigeria Economic Zones Association, said that the forum was important to address the concerns of his members on the tax administration pact signed between NEPZA and FIRS.

According to him, the discussions from forum elicited hopes and assurances on the commitment of government to support the in-flow of Foreign Direct Investment (FDI) through the free trade zone scheme.