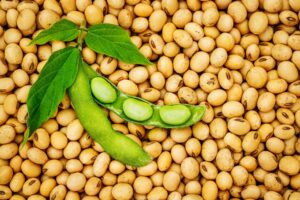 The Nigerian Export Promotion Council (NEPC) has called on development partners and stakeholders in the Soya beans business to join the council to boost production and export of the produce in Plateau.

The council made the call during its workshop organised for stakeholders entitled: “Rebirth of Soya Beans Value-chain for Export Competitiveness in Plateau’’ held on Tuesday at Bukuru and Bassa local government areas.

Mr Samson Idowu, the Regional Coordinator of NEPC, made the call while reiterating the importance of the plant, popularly known as the “miracle plant”.

According to him, there is a need for partnership with the state government and the private sector to tap into the multiple values of Soya beans.

“We call on stakeholders that can assist in upscaling Soya beans production in the state to join hands with us to boost production and export of the produce.

“There are several issues to note and fertiliser is one where we need immense support.

“All year farming is critical; we do not want a situation where it is only rainfall farming that is observed.

“We need to go into irrigation so that farming can be done beyond the normal one circle.

“Those are the areas that other agencies, government or development agencies can partner with us to boost production and make export a success.

“If we look at it nationally our total output is not commensurate with our consumption, there is a gap between production and consumption.

“So, there’s a gap and if we can’t meet our needs locally, then exporting becomes an issue, so that is one of the reasons why we are here,” he said.

The regional coordinator called on farmers on the Plateau to take advantage of the free learning sessions that NEPC organises to improve themselves and be better for it economically.

Speaking earlier in Bassa, the Commissioner for Commerce and Industry, Mr Gambo Idris, admitted that NEPC was one of the best things that had happened to Plateau in recent times.

He promised to engage the council in roundtable for the purpose of promoting the Federal Government’s “Export for Survival’’ Campaign.

Also, Dr Albert David, Chief Operating Officer, Greencoast Ltd. and a resource person at the event, stressed the need for stakeholders to join hands to boost the production and export of Soya beans in the state.

Mr Davou Dung and Esther Mshelia, both participants at Bukuru thanked, NEPC for the opportunity to broaden their knowledge and promised to utilise the information received to meet export demands of the product.

Similarly, some participants at Bassa also acknowledged that they were better positioned to handle Soya beans production in their local government areas.

Soya beans contains vitamins and minerals including vitamin K1, folate, copper, manganese, phosphorus which help in the proper functioning of the body.