Williams, a lawyer and founding member of the Civil Society Steering Committee of NEITI won the Prize for Africa as a result of his leadership in championing environmental justice in the Niger Delta. 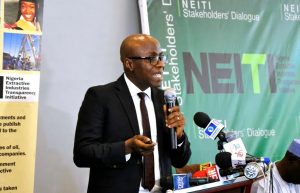 The Nigeria Extractive Industries Transparency Initiative (NEITI) has hailed the declaration of a renowned environmental activist, Chima Williams as one of the six winners of 2022 prestigious Goldman Environmental Prize.

A statement on Sunday by Mrs Obiageli Onuorah, Deputy Director/Head Communications and Advocacy said Dr Orji Ogbonnaya Orji, Executive Secretary, NEITI made this known in his congratulatory message to the environmental activist.

Williams, a lawyer and founding member of the Civil Society Steering Committee of NEITI won the Prize for Africa as a result of his leadership in championing environmental justice in the Niger Delta.

This was through his legal fight for the clean-up of the Ogoni land especially helping three communities in the Niger Delta.

He helped Oruma, Goi and Ikot Ada Udo communities in Ogoni land, Bayelsa State to win the 13-year-old case for the oil spills and environmental damages against Shell at The Hague.

He was also part of the legal team that litigated the action against gas flaring in the Iwherekan community in Delta State in 2005.

“It is also an encouraging development to NEITI’s commitment to push the boundaries of civic space in tackling environmental degradation in Nigeria which is in line with EITI standards,” Orji stated.

The NEITI executive secretary said that, Williams through the years had been committed and dogged in his advocacy for justice and equity for vulnerable citizens, especially those who resided in the Niger Delta region.

Others are Nalleli Cobo of the U.S. who collected the prize for North America as well as Alex Luciatante and Alexandra Narvaez from Ecuador who jointly won the prize for South America.

The global award, known as Nobel Prize for grassroots advocacy to protect the environment” was announced in a virtual ceremony held on May 25, 2022 due to COVID-19 restrictions.

“We hope that as Nigeria moves into environmental reporting, Williams, a valuable resource person on environmental issues, will bring his wealth of experience, skills, and expertise to guide and complement our efforts as we engage the sector, ” Orji said.

The award was announced at the time Williams was in Abuja as a lead discussant at a seminar on addressing environment challenges in Nigeria.

The Goldman Environmental Prize started in 1989 and is awarded annually to honour the achievements and leadership of grassroots environmental activists from each of the world’s six inhabited continental regions.

The Prize recognizes individuals for their sustained significant efforts in protecting the environment and seeks to inspire other ordinary people to take extraordinary actions to protect the natural world.

Williams is the third Nigerian to receive the prize after the late environmental activist Ken Saro-Wiwa won it in 1995.

Super Eagles: Peseiro proud of team, despite loss to Mexico