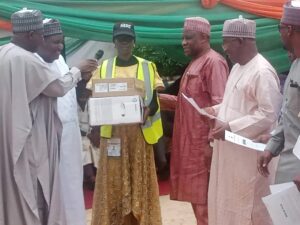 Mr Mohammed Alkali ,Managing Director of the commission,made the disclosure on Thursday in Maiduguri, at the presentation of certificates and starter packs to beneficiaries of the batch “C”  ICT  training programme.

Alkali said under the programme, each of the six states in north east would have three training centres, making  a total of 18 centres for the training of the youths.

According to him ,the youths will be trained in areas of graphic design and smart phone repairs,among others.

Alkali,who also presented modern equipment to the management of Borno Geographic Information Systems (BOGIS) at the occasion, said NEDC decided to present  the equipment  owing  the critical role played by the agency  in handling land matters .

He said the equipment would be helpful to the agency ” at this period of post insurgency as displaced persons return to their ancestral land.”.

The managing director also announced the approval of the construction of staff quarters for the newly established Federal Polytechnic Monguno and an engineering faculty complex in Borno State University by the commission.

He  said that,in compliance with the directive of President Buhari for the opening up of Zabarmari axis of Jere LGA, where some rice farmers were killed last year, the commission had approved a network of roads in the area to ease agricultural activities and movements.

In his remarks,   Permanent Secretary, Ministry of Humanitarian Affairs and Disaster Management, Mr Nasir Gwarzo, lauded the ICT programme,which he said, was a strategic approach in addressing current and future problems.

Gwarzo urged the beneficiaries of the training to make good use of the opportunity to empower themselves in e-businesses.

He cited  a lady, one Fatima from Borno,  he had  never met but usually bought things from her  after seeing her products online

Speaking , Gov. Babagana Zulum,represented by his Chief of Staff, Prof. Isa Marte, thanked the commission for its interventions in critical areas  in the state.

Zulum said the interventions were in line with the government 10-point agenda,which  included security, food security, education, roads and health.

Some of the beneficiaries of the ICT training, thanked the Federal Government and NEDC for the programme ,which  benefits they said they had started enjoying.

The News Agency of Nigeria (NAN) reports that each of the beneficiaries was given  a starter pack and the sum of N25,000.