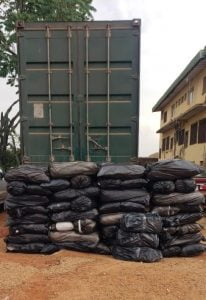 The Plateau Command of the National Drug Law Enforcement Agency (NDLEA) has seized over 2,000 tonnes of drugs in the state from January to date.

Mr Umar Yahuza, Commander of the Agency in the state, disclosed this in an interview with the News Agency of Nigeria (NAN) in Jos.

“We have recorded tremendous successes from January to this moment; we have seized over two tonnes, almost two and a half tonnes of illicit drugs.

“The breakdown is as follows, out of this almost two and a half tonnes, we have seized Cannabis sativa which on the street we call ganja or ‘wee-wee’.

“Then we have the psychotropic substances, which includes drugs like pentazocine, Tramadol, diazepam, and so on.

“This group of psychotropic substances from January to this month, we have seized over 231 kilogrammes.

“Cocaine seized from January to date, accounts for 233.3 grammes, we have another drug of methamphetamine.

“We have seized 126.2 grammes of amphetamine which gives us a grand total of two tonnes 341.986kg of illicit drugs seized in plateau from January to this moment” he said.

Similarly,  Yahuza said that the command had arrested 290 suspected drug addicts and peddlers in the state within the period under review.

He added that his men also arrested suspects with other prohibited items and have handed them over to relevant authorities for prosecution.

“And these people have been charged to court and they are at various stages of prosecution.

“Added to that, in the course of our activities, we have come across people with other prohibited items.

“For example, we arrested this young woman with about 2500 fake currency dollars, and she was handed over to the Nigerian police force for further action.

And on efforts to curtail the influx of illicit substances in the state, the Commander said so much was being done, in terms of public enlightenment and sensitisation to garner the  cooperation of the public.

He thanked Brig.Gen. Buba Marwa (rtd), the chairman and Chief Executive of the Agency whose foresight he said, had inspired the successes recorded in the fight against drug use and abuse in the country.

The Commander added that without the cooperation of the public, the job wont be easy, saying that men of the agency were always on their toes to swing into action to checkmate the excesses.

He, therefore, called on the public to continue to cooperate with them and report any suspicious acts noticed within their surroundings or environment.