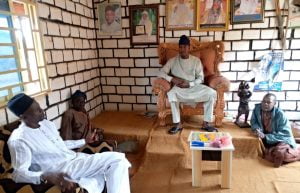 Mr Umar Adoro, Commander, National Drug Law Enforcement Agency (NDLEA) in Kaduna State, on Tuesday began advocacy visits to communities to solicit support in the fight against drug abuse and trafficking.
The News Agency of Nigeria (NAN) reports that Adoro was at the palaces of the village head of Anguwan Makeri and the District Head of Gonin Gora in Chikun Local Government, as part of the advocacy.
He said it was necessary to meet with traditional leaders at the grassroots, so as to get first-hand information on the drug abuse situation in their communities.
The commander said this was important because the grassroots has been most affected by the menace of illicit drug trafficking and consumption.
He added that the visit was imperative owing to the location of the communities on the strategic Kaduna-Abuja highway.
According to him, the NDLEA relies on relevant stakeholders in the conduct of its operations as such it is necessary to  continuously raise awareness and sensitise stakeholders to be part of the campaign on the dangers of illicit substances.
Adoro said, between January and August, the Agency has intercepted 10 tons of illicit substances in the state.
He therefore appealed to all stakeholders to continue to cooperate with the Agency by providing accurate and timely information on the activities of drug pushers, so as to stem the tide.
The commander told the traditional leaders that the fight against the illicit drug is not only for security agencies alone, but a collective responsibility to save the society.
“Traditional institution has a critical role to play because you are also critical stakeholders in the fight against the menace,” he added.
Adoro urged the youth to always engage in meaningful ventures that would add value to their communities.
The village head of Anguwan Makeri, Mr Yohanna Makeri appreciated the visit and commended the agency for the progress they are making in the fight against illicit drugs.
Makeri said he has been following the breakthrough on fight against drug trafficking in the country and reassured the commander on working together in the fight against the menace.
Also, the District Head of Gonin Gora, Mr John Yusuf-Sarki commended the NDLEA for the visit, describing it as timely.
He pledged to support and cooperate with the Agency in the fight against illicit drugs and trafficking.
Sign in
Welcome! Log into your account
Forgot your password? Get help
Password recovery
Recover your password
A password will be e-mailed to you.