Adeniran said expanding the scope of its data would ensure that the NBS was delivering on its mandate of producing “relevant and adequate” information for policy decision making. 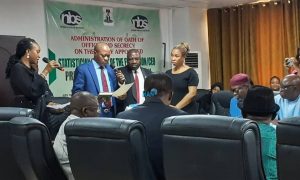 The new Statistician-General (S-G) of the Federation, Prince Semiu Adeniran, says the bureau will expand its scope to produce data on migration, Internally Displaced Persons(IDPs) and security.

Adeniran made this commitment while taking the Oath of Office and Secrecy ceremony at the NBS headquarters in Abuja on Wednesday.

He said this had become necessary for the bureau’s data to be relevant to the times and reflect the current situation in the country.

Adeniran said expanding the scope of its data would ensure that the NBS was delivering on its mandate of producing “relevant and adequate” information for policy decision making.

He added that it would also mean that the bureau was contributing its quota of solutions to the challenges being faced by the country.

“As the role of national statistics offices across the world expands in the modern-day data ecosystem, we will focus on building our capacity to produce further insight and knowledge base.

” We will also expand the scope of our statistical product to reflect the recent development in the macro and socio-development space.

“In this light, in the coming months, we will begin the process of producing statistics on new areas such as migration, IDPs and data on security.

” All these are issues currently on the front burner of the political sphere and prominent in the hearts of citizens and policymakers, hence we need to play our role as the authoritative source of official data in this regard.

Adeniran noted that the late S-G’s tenure, though brief, was impactful as he committed to consolidating his achievement.

He said the late S-G’s legacy was synonymous with hard work, compassion, dedication, and development for his fellow man regardless of race, tribe and creed.

” We will go forward together in line with the three-point agenda set by Dr S.B
Harry, namely general administration and human resources management, infrastructure development and sound technical operations.

“I will seek to consolidate on the achievement he recorded. The current structure of the office will be maintained and where possible improved on as the need arises. ”

He said efforts would be made to ensure the bureau delivered on its mandate.

“Hence our initial focus will be on strengthening our technical operations by enhancing staff capacity to accurately produce, disseminate and interpret statistics to inform policy design in Nigeria.”

Adeniran said the capacity enhancement would be done through organised training and courses both locally and internationally, on the job learning and in-house coaching by knowledgeable staff of the office.

He added that where necessary, external experts will be contacted to provide support to the staff of the bureau.

According to him, this is aimed at closing existing technical gaps already identified across the departments.

“This will also expand existing capacity to ensure that as a system, we are able to cope adequately with the ever increasing demand for data. ”

Adeniran said that efforts would be made to improve the general orientation and philosophy of staff members through change managerial courses and orientation programmes offered by the Administrative Staff College of Nigeria and other renowned institutions.

The new S-G said that the bureau would accelerate its ongoing work with the World Bank in revising its methodology for producing Labour Force Statistics in Nigeria.

” This is very important as it will ensure that we move to a system where we generate, on a sustainable basis, adequate quarterly statistics on the labour market in Nigeria, to inform the government on their job creation efforts.”

He said in the coming weeks, the bureau would begin the process of rebasing the Consumer Price Index and the reweighting of the consumption basket.

“As we all know, the rebasing of the Gross Domestic Estimates is also one that has been talked about in recent times.

“With the ongoing National Agriculture Sample Census, which is intended to serve as a major input to the process, we will ensure that both NASC and all other surveys and administrative data collection efforts were completed successfully in preparation for the rebasing sometime next year. ”

On infrastructure development, Adeniran said the office had in no small measure experienced a huge transformation and facelift over the last eight months.

He gave assurance that this development would be sustained and maintained over the coming years to ensure a conducive working environment for staff members to perform their duties.

The S-G also assured that the welfare and conditions of service for staff members would be made paramount.

“Therefore, I will work tirelessly, using all available resources I can muster and all the contacts within my network to make this happen in the near future.

“Our staff will be proud of their office and will become the envy of staff of other public agencies we look up to today.”

He pledged to continue to work with the bureau’s partners, both locally and internationally, including line ministries, departments and agencies of government.

The S-G called on all staff members and management to work collectively for the progress of the bureau.

“I commit to be fair and justiciable in my dealings with you, doing what I know in my innermost is best for the progress of the office.

” I also urge you all to extend the same to your staff and subordinates, ensuring that they are also carried along in the process so that they feel valued and become committed to working in the office. ”

Mr Godwin Ameh, Director, Corporate Planning and Statistical Coordination, NBS, in his response, assured that staff members and management would give the new S-G their support to carry out his duties effectively.

The News Agency of Nigeria (NAN) reports that the S-G was sworn in by His Worship Olubunmi Achegbulu, who charged him to carry out his duties with fairness and justice.

President Muhammadu Buhari approved the appointment of Adeniran as the S-G of the Federation and Chief Executive Officer of the NBS on May 20.

Adeniran’s appointment follows the demise of the former Statistician-General of the Federation, Dr Simon Harry, on April 13.

Until his appointment, Adeniran was the Director of Demographic and Household Statistics at the National Bureau of Statistics (NBS).

Adeniran who was born in Oyo State, has for the past 30 years been a professional statistician of repute.

He attended the Polytechnic Ibadan and proceeded to OAU and Oxford University in the UK.

Adeniran has served on no fewer than 10 presidential committees.