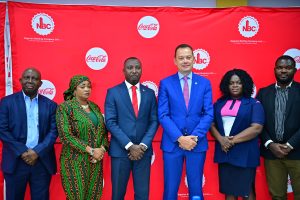 Nigerian Bottling Company (NBC) Ltd., the bottling partner of the Coca-Cola Company in Nigeria, on Thursday signed a Memorandum of Understanding (MoU) with the implementing partners of its recently announced €1 million donation.

The News Agency of Nigeria (NAN) reports that the MoU was signed at the company’s headquarters in Lagos.

Speaking during the ceremony, the Managing Director of NBC, Mr Matthieu Seguin, said the donation reflects the company’s commitment to enriching communities in Nigeria.

Seguin added that the donation would be targeted toward empowering youths and women, the provision of water and sanitary facilities, as well as scaling its PET recycling initiatives in Nigeria.

“This donation underscores our commitment to improving the lives of our communities.

“It will be directed toward areas we believe we can have the most impact – empowering youths and women, and the provision of water and recycling facilities.

“I would like to particularly thank our partners in these initiatives, who have been selected based on their strong track record and will work with us to ensure that this investment is directed where it’s needed most,” Seguin said.

He noted that the key partners for the programmes covered under the €1 million donation include Karis & Eleos Hand of Hope Foundation, West African Vocational Education (WAVE), Organised Private Sector in Water, Sanitation and Hygiene (OPS-WASH) and Chanja Datti Ltd.

According to him, OPS-WASH will deliver state-of-the arts toilet facilities across identified communities in five states in Nigeria, reaching about five million people annually.

Seguin said that the fund via its parent company Coca-Cola Hellenic Bottling Company would be deployed to support four key initiatives including the Federal Government of Nigeria’s journey toward becoming Open Defecation Free (ODF) by 2025.

He added that it would be deployed for upskilling underserved youths and women in high demand skills; and community recycling initiatives.

Seguin the execution of the projects by its implementing partners would be executed within 12 months.

He said that  WAVE Academy would undertake the up-skilling of youths in Abuja, Lagos, Oyo, Osun, Edo, Rivers and Kaduna in Digital and Hospitality skills and connect them to job opportunities.

He said that Karis and Eleos Hand of Hope Foundation would focus on empowering vulnerable women across eight states with relevant skills to support economic inclusion of women.

Seguin added that Chanja Datti would drive the intervention that supports community recycling in Lagos State and Abuja.

He said that the initiative would also contribute to raise the number of recycling banks in the selected communities.

The managing director said that it would further support in raising awareness on responsible disposal of wastes, especially plastics, while empowering vulnerable women economically.

He said that the MoU provides a formal framework for the programmes based on shared values and further demonstrates NBC’s commitment to contribute to the uplifting of communities and socio-economic development in Nigeria.

Seguin said that the donation was part of NBC’s 70th anniversary celebration and reflects the company’s unwavering commitment to Nigeria and its people.

In her remarks, the Lagos State Commissioner for Women Affairs and Poverty Alleviation, Mrs Cecilia Bolaji Dada, commended the company for the donation.

“The Ministry commends NBC on their laudable impact in alleviating poverty amongst the citizenry and the state in general, by empowering vulnerable women and young girls in the society through their various programmes.

“I encourage women everywhere to continue to avail themselves to various opportunities to become empowered, self-reliant, and independent financially,” she said.

The commissioner  was represented at the event by Funmi Raji.

Mr Jande Tarfa, a representative of one of the partners, WAVE, said the donation would enable the organisation to expand the scope and impact of its youth empowerment initiatives and reach even more beneficiaries across the country.

Tarfa said that the partnership would come to life in key areas of shared value including promoting water sanitation & hygiene (WASH).

He added that the partnership would also promote skills development programmes for women and youths as well as accelerate its World Without Waste agenda in Nigeria.

NBC is a member of the Coca-Cola Hellenic Bottling Company (CCHBC) Group.

NBC is an anchor bottler for the Coca-Cola Company in 28 countries with over 605 million consumers and 197 brands in these markets.