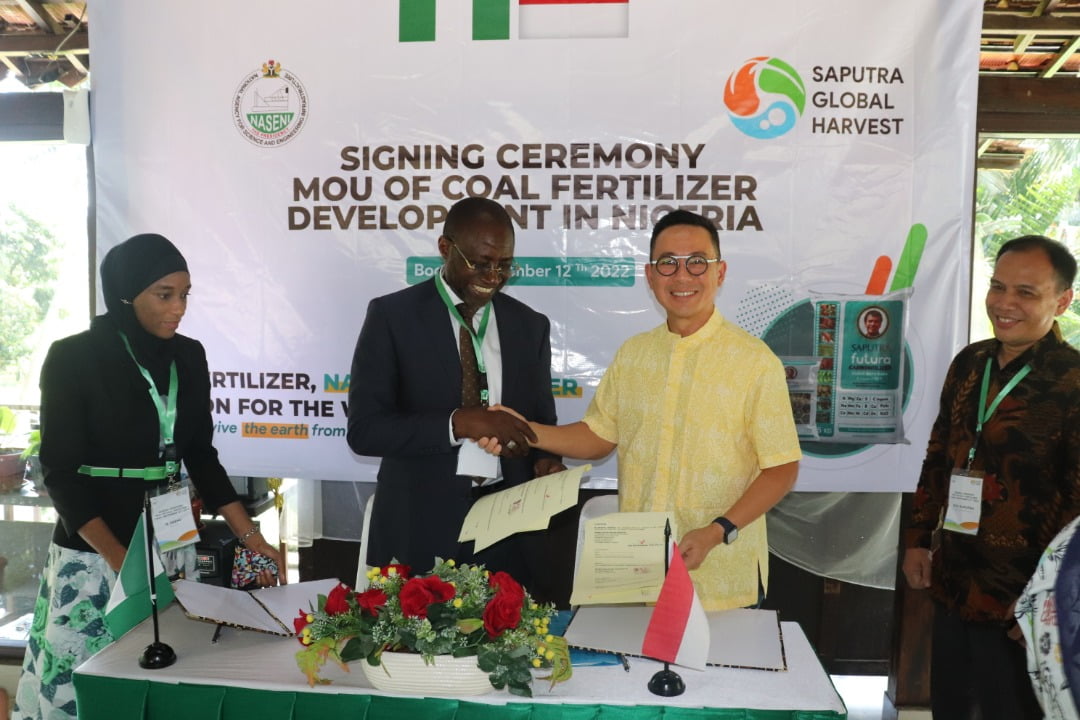 The National Agency for Science and Engineering Infrastructure (NASENI) has signed a Memorandum of Understanding (MoU), with the PT Saputra Global Harvest Indonesia, on transfer of Technology on Saputra products, especially its innovative coal fertilizer.

The Executive Vice Chairman and Chief Executive of NASENI, Prof. Mohammed Haruna, made the disclosure in a statement issued by his Special Assistant on Social Media, Mr Peter Ewu, on Tuesday in Abuja.

Ewu explained that the MoU was the first of various MoU’s to be signed during the working visit of the Nigerian delegation to Indonesia.

He added, ”the signing of the MoU, which was a step in the right direction in rejuvenating the agricultural sector of Nigeria, was held at Villa Sawah Resort and Farm, Bogor, in Indonesia.

“The Federal Government of Nigeria had cemented its bilateral relationship with the Republic of Indonesia through the historic signing of the Memorandum of Understanding (MoU).” Haruna was qouted as thanking Saputra Global Harvest for a good working relationship and he extolled the transformative leadership of the President Muhammadu Buhari’s administration for championing the realisation of the long overdue bilateral relationship between Nigeria and Indonesia.

He further stated that, NASENI would remain a willing partner in the production of coal fertilizers as well as export to other African countries.

The NASENI boss expressed appreciation to the Embassy of Indonesia in Nigeria for its active participation, promotion and support.

Haruna assured of NASENI’s unalloyed commitment to the complete execution of the MoU.

On his part, the Chief Executive Officer (CEO) of Saputra Global, Mr Davy Makimian, thanked NASENI for its zeal and passion throughout the process.

He said that the coal fertilizer, which was the first of its kind would bring tremendous impact on agriculture, livestock and farming in Nigeria.

He added that the MoU would enable NASENI to champion the construction of the first Coal Fertilizer Plant in the continent of Africa.

Also, Mr Usman Saputra, the Commissioner of Saputra Global Harvest and Inventor of Saputra Coal Fertilizer, highlighted the benefits of coal fertilizer to the agricultural sector and the planet.

He said the technology was seamless, supports food security and sustainability programmes around the world with the ultimate goal of reviving the earth from its demise by replenishing soil nutrients.

Similarly, the Chairman, Senate Committee on Science, Technology and Innovation, Sen. Uche Ekwunife, commended NASENI’s helmsman for his commitment and hard work in bringing the partnership to fruition.

She pledged the committee’s continuous support of NASENI in all its activities, especially in the domestication of the MoU which she described as one that would bring about economic growth and move Nigeria from a consumer economy to a producer economy.

The delegation was led to the farm where they participated in the Paddy Harvest using the coal fertilizer technology.