According to the statement, shareholders of the company commended its impressive performance, in spite of the harsh economic operating environment, just as the company emerged the best haulage company of the year. 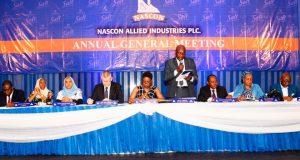 National Salt Company of Nigeria (NASCON) Allied Industry Plc, a subsidiary of Dangote Industries (DIL) Ltd., said it recorded a net profit of N2.97 billion, while profit before tax rose from N3.9 billion to N4.3 billion for the year 2021.

This translates to a 10.25 per cent profit before tax increase.

The company said this in a statement signed by Mr Francis Awowole- Browne, Media and Communication Personnel, DIL, on Sunday in Lagos.

According to the statement, shareholders of the company commended its impressive performance, in spite of the harsh economic operating environment, just as the company emerged the best haulage company of the year.

NASCON Chairman, Mrs Yemisi Ayeni, said the company was able to surmount the crisis posed by the COVID-19 pandemic and the attendant unfavourable economic climate.

This, she noted the company was able to achieve due to certain business strategies put in place, which insulated the company from the negative effects of the pandemic.

Also, Acting Managing Director, NASCON, Mr Thabo Mabe, stated that the company would not rest on its achievements but move from street to street, market to market, introducing its array of products to consumers.

“As a company in the fast-moving consumer goods sector, the management team has developed plans and strategies to capture more share in chosen markets and will gradually deploy them in the coming months,” he said.

Group Executive Director, Commercial, NASCON, Hajiya Fatima Aliko Dangote, said the company used the period of the downturn occasioned by the pandemic to lay a solid groud with the construction of the state of the art salt processing factory in Apapa.

“Going forward, the company would begin to reap the reward which ultimately would translate to higher dividends for the shareholders,” she said.

She stated that the overall performance of the company was also reflective of its seven sustainability pillars geared towards ensuring that the company connects with all stakeholders.

Another shareholder, Mrs Adetutu Siyanbola, said the company’s transport team section should be commended for winning the best haulage company of the year.

The development, she said, was worthy of note; out of the 684 companies that enrolled for the Road-Transport-Safety-Standardisation-Scheme of the Federal Road Safety Corps(FRSC).

A shareholders’ rights’ activist, Mr Sunny Nwosu, lauded the board and management of NASCON for their ability to pay dividends in spite of the harsh operating environment such as the Apapa Wharf gridlock and the downturn in national economy.

He noted that while other companies were lamenting and cutting down on production, the company was paying dividend; a commendable development.