Ebelechukwu, who spoke with newsmen on the outcome of a joint meeting with NAICOM and the Committee, directed   insurance  firms to ensure that insurance practitioners were conversant with  AMLCFCT regulations. 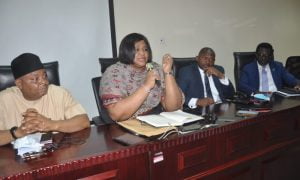 Mrs Ebelechukwu Nwachukwu, Chairman Publicity and Communications of Insurers Committee, comprising NAICOM directors and CEO’s of all insurance companies, gave the charge on Thursday in Lagos.

Ebelechukwu, who spoke with newsmen on the outcome of a joint meeting with NAICOM and the Committee, directed   insurance  firms to ensure that insurance practitioners were conversant with  AMLCFCT regulations.

“This is to ensure that from industry perspective, we can contribute more positively to Nigeria.

“The general rating of the country in terms of AMLCFCT is low, so, every sector is expected to charge its players to ensure that the rating is improved,” she said.

Ebelechukwu, also Managing Director, NSIA Insurance, said that the directive  was also to ensure that every sector of the economy must be up to-date  with customer due diligence. .

On the upward review of the third-party motor insurance and ECOWAS brown card,  Ebelechukwu said that there was no position taken on the new price.

She said: “The commission had directed that the process for the new price should  be completed by the end of April.

The chairman, however, said the commission has charged insurers to improve documentation for effective implementation of the Risk Based Supervision (RBS) .

Ebelechukwu stated that by the end of April, the commission would issue a definite statement on RBS and a roadmap that will steer the insurance industry new capital regime.

On NAICOM portal, the chairman said the commission was encouraging insurance companies to be using the portal regularly for data uploading.

She stated that the insurers committee had discovered that improper documentation was responsible for certain unpaid claims in the insurance industry.

On the Insurance bill,  Ebelechukwu said the matter was before the national Assembly.

She assured that the Insurance Committee would work hand in hand with media to sensitize the public on  insurance policy documentation.

The News Agency of Nigeria reports that Insurers Committee was established by NAICOM in 2015 and consists of chief executive officers of underwriter Insurance companies in Nigeria.