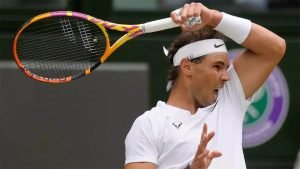 Rafa Nadal’s hopes of completing a rare calendar year Grand Slam ended on Thursday when the Spaniard withdrew from his highly-anticipated showdown with Australian Nick Kyrgios with an abdominal strain.
“I have to pull out of the tournament as I have been suffering with pain in the abdomen,” said the 36-year-old, the holder of a men’s record 22 Grand Slam titles.
READ ALSO:https://brandpowerng.com/halep-beaten-but-not-broken-after-wimbledon-run-ends-in-semi-finals/
Nadal had triumphed at the Australian and French Opens this year and had been hoping to become the first man since Rod Laver in 1969 to complete the calendar-year slam.
(Reuters/NAN)
Sign in
Welcome! Log into your account
Forgot your password? Get help
Password recovery
Recover your password
A password will be e-mailed to you.