“In sum, the stock of the FSS has grown in leaps and bounds as the agency has contributed significantly to national security in the protection of lives and property,” he said. 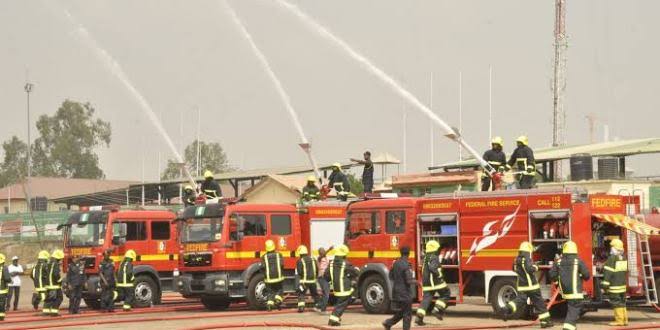 Nigeria lost N3 trillion to 2,845 fire outbreaks in 2021, Interior Minister Rauf Aregbesola has said.
Aregbesola made this known on Wednesday while decorating the newly-promoted Deputy Controllers-General (DCGs) of the Federal Fire Service (FFS).
The minister also said that the FFS saved properties worth N18.9 trillion, 587 lives and rescued 260 persons from raging fires.
He said that in 2021, the FSS responded to 2,845 SOS distress calls.
“In sum, the stock of the FSS has grown in leaps and bounds as the agency has contributed significantly to national security in the protection of lives and property,” he said.
Aregbesola noted that the reason for achieving such a feat was because between 2015 and now, the Federal Government led by President Muhammadu Buhari committed more resources into the service compared to since its creation in 1901.
“The attention and resources devoted by the Buhari administration since 2015 is more than whatever has been put into it since its establishment in 1901.
“Between 2015 and 2020, the Federal Government provided 106 modern firefighting trucks to the service.
“In 2021, the Federal Executive Council (FEC) also approved the procurement of some equipment and have since been procured and deployed.
“N10.4 billion infrastructure upgrade comprising of 44 firefighting engines, 15 water tankers, 15 rapid intervention fire engines (not conventional ones) that can go into the nooks and crannies to respond to distress-calls and 20 basic life support ambulances,” he said.
He also said that 17 firefighting officers were sent to Belarus for an advanced trainer-training course.
These officers, he said, are the master trainers that will be training other officers on modern firefighting, disaster and emergency management.
Aregbesola commended the immediate past Controller-General of the service, Alhaji Liman Ibrahim, for his visionary leadership and invaluable contribution to the service, saying he will miss working with him.
“I must not fail to commend and thank the erstwhile C-G, for his innovation, industry and perspicacity. He is the human instrument of the revolutionary changes at the FSS.
Don't miss
NEWS

“His capacity to grasp issues and policies and make them actionable is legendary. I will miss working with him. I thank him for his invaluable services to the nation through the FSS.
”I pray that he will be happy and fulfilled in retirement and have resounding success in his endeavours,” Aregbesola added.
The minister condemned the rising incidents of criminals, hoodlums and touts who indulge in attacking firemen and their equipment while attending to fire emergencies.
He, however, noted that the service had now developed the capacity to effectively contain and deter them.
One sad reoccurring phenomenon, he added, is touts and miscreants attacking firemen and their equipment whenever they respond to fire emergencies.
“This is deplorable and totally condemned.
“For this purpose, we have worked out modalities on armed escorts accompanying firemen on assignment, for the protection of their lives and the equipment,” the minister stressed.
Aregbesola congratulated the newly decorated DCGs, adding that DCG Karibo Samson will continue to lead in an acting capacity until a substantive Controller-General was appointed.
READ ALSO:https://brandpowerng.com/3-months-after-launch-nigerian-are-adopting-the-enaira-emefiele/
“I will like to congratulate the newly appointed Acting C-G and DCGs being decorated, Karibo Samson, Jaji Abdulganiyu, Agunloye Oluokun and Agu Kanny.
“It is of particular interest to me when the acting C-G said he joined the service as a fireman. It means the service is an equal opportunity employer; every fireman has the potential to become the CG.”
Responding on behalf of newly promoted officers, acting C-G of the service, DCG Samson thanked President Muhammadu Buhari for the confidence reposed in them.
He promised that they would not disappoint Nigerians in discharging the statutory responsibility to the public.
(NAN)