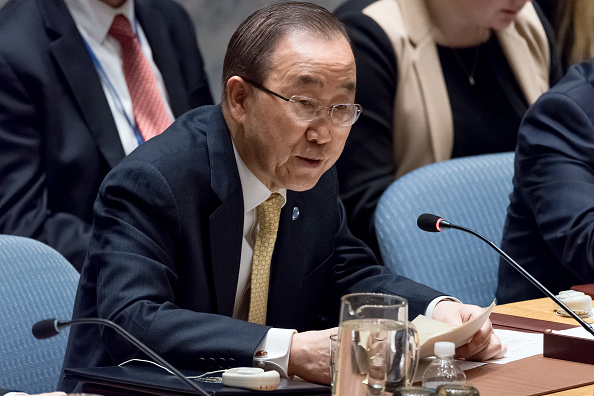 Outgoing UN Secretary-General Ban Ki-moon bid the Security Council farewell, telling the Council that the protracted conflict in Syria remained his greatest regret as he bows out of office.

Ban, in an emotion-laden speech, told the 15-member Council that it is strongest when united.

“I encourage the Council to continue its very important work in this regard and I know that my successor, António Guterres, will be a most determined ally,” Ban said.

He emphasised that “the Council is strongest when it is united,” citing examples of successful initiatives including the destruction of chemical weapons in Syria and the UN’s emergency response to the Ebola epidemic in West Africa.

The outgoing secretary-general noted, however, that a lack of unity has proven to be profound, even catastrophic in the case of South Sudan.

“However, my deepest regret on leaving office is the continuing nightmare in Syria. I once again plead with all of you to cooperate and fulfil your collective responsibility to protect Syrian civilians.”

He also highlighted a stronger partnership with the African Union and mainstreaming women, peace, and security into the Security Council’s agenda, particularly with regards to its decision to address sexual violence in conflict.

Ban expressed gratitude for the opportunity to have served the UN over the past 10 years.

He also noted the Council’s successes, including its decision to establish the Force Intervention Brigade in the Democratic Republic of the Congo, and the integral role of the UN in securing peace in Nepal, particularly during its 2008 election, as well as creating greater stability in Côte d’Ivoire and Liberia.

In its farewell to Ban, the Security Council acknowledged his contribution to international peace, security and development, in particular his exceptional efforts to solve international problems in economic, social, environmental and cultural fields.

Adopting a resolution by acclamation, the Council also acknowledged his endeavours to meet humanitarian needs and to promote and encourage respect for human rights and fundamental freedoms for all.

“As Secretary-General, you have succeeded in ensuring that the organisation took advantage of the technological advances and prepared itself to meet the challenges of continued globalisation, technological change and emerging new threats.

“Today’s world is very different from that of 10 years ago,” Román Marchesi(Spain), President of the Council for December, said.

The president of the Council also commended Ban for the establishment of the Human Rights Council and the UN Entity for Gender Equality and the Empowerment of Women, known as UN-Women, along with the appointment of the first Special Envoy on Youth.

In a similar resolution on Monday, the General Assembly paid a glowing tribute to Ban for his “never-tiring service to humanity” over the past decade.

Ban also participated in events to commemorate the end of his tenure, including a town hall meeting with UN staff from around the world, and the unveiling of his portrait by the Korean artist Lee Won-Hee, which will hang alongside those of his predecessors in the Secretariat’s lobby.

“I have come to understand our values as a unique and precious well. The more one draws from it, the deeper it gets. Above all, I thank all the partners who have made the past 10 years full of meaning and purpose. I salute each and every one of them for the picture they are painting every day; of a world with more justice, more dignity, and more opportunity for all,” he said during the unveiling of his portrait.

The outgoing secretary-general will step down on December 31, 2016 after a decade of two-term as the UN scribe from January 1, 2007.

The incoming secretary-general António Guterres, who took the oath of office on Monday, will assume office on January 1, 2017 for the next five years.

247 Health Centers Destroyed In Borno – WHO

WhatsApp To Stop Running On Some ‘Old’ Phones…

NIRSAL Improves Capacity in Agric Sector With Training Of…