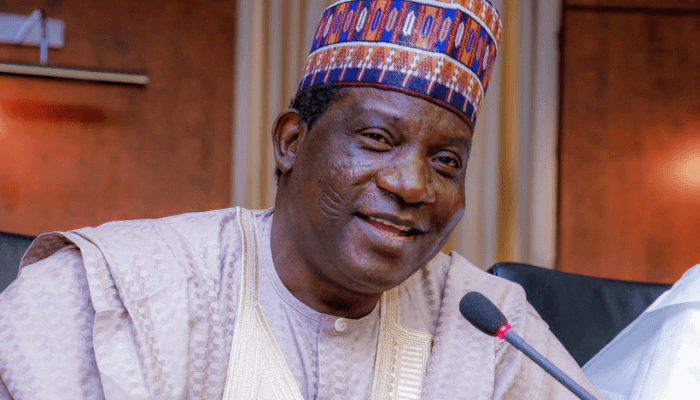 Director-General of the All Progressives Congress (APC) Presidential Campaign Organization, Simon Lalong, says he will not resign as the party DG campaign organization.

Lalong said that even Pope is not opposed to his appointment

Lalong, who is also the Governor of Plateau, an ardent Catholic, said the Pope had not told him that accepting to lead the Muslim-Muslim APC presidential ticket was against the tenets of Christianity.

The News Agency of Nigeria (NAN) reports that some groups had staged rallies in Abuja, calling on Lalong to reject the offer to serve as the DG of APC presidential campaign organization.

However, the governor said he would not reject his new appointment just to satisfy the wishes of certain individuals or groups.

”The Pope is not angry with my decision to be the DG of the Muslim-Muslim presidential campaign.

“I came back home and Christian Association of Nigeria (CAN) welcomed me at the airport.

”The next day I addressed stakeholders of Plateau and I told them why I’m accepting and then there was jubilation, all of them accepted.

“So, if you see people talking about me rejecting, I have accepted already – is not an issue. Some of them have already keyed into it – I’m a Christian. If you watch my TVC interview I saw, I was born a Catholic, baptized a catholic, confirmed a catholic.

“Today, I went through missionary schools. I was taught by missions I respect my being a Christian.

“I have been given the highest award by the Pope, I still hold that award – the highest Papal Award, I want people to know, Knight of Saint Gregory the Great, I have it and one day if you want I will wear my uniform and come here. So those who are talking it I don’t even know where they are.

“I hold a Papal night and as a catholic everything we do, we do it and send the advice to the Pope.

“The Pope has not told me that what I’m doing (to accept Director General) is bad – As a catholic, we take that direction.

He urged Nigerians to grow up from ethnic or religious sentiments.

Lalong said that he had already accepted the job and there was nothing anybody could do to dissuade him from performing his responsibilities.

Lalong said he was in the Presidential Villa to thank President Muhammadu Buhari for approving the University of Jos as a national cancer centre as well as granting presidential pardon to the former Governor of the state, Joshua Dariye.

According to him, the people of the State will remain grateful to the president for delivering a lot of democratic dividends to the State.

“My visit to the President is to come and show him appreciation because of what he has done for Plateau State in the last few months.

”Just a week or two ago, we just got approval to make the University of Jos a Cancer Centre.

“I saw over N3 billion approved for the institution as a special centre for cancer. So, it’s not a small achievement.

“Recently, the President approved the establishment of an orthopaedic hospital in Jos, Plateau; the only one in North-Central.

“He also approved the establishment of a Federal Medical Centre in Wase. Another one is the Federal Polytechnic Shendam, which is almost starting this year in October to be precise.

“We were just celebrating that one then we also heard of the establishment of a Zonal campus of the Nigerian Law School for North-Central in Jos.

“We cannot have all these achievements and not come and show appreciation to the President,” he said.