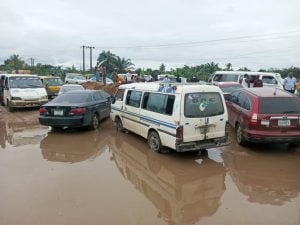 Commuters and motorists on Tuesday groaned in gridlock for close to four hours on Ibiye bus stop along Agbara Badagry expressway, Lagos.

The News Agency of Nigeria (NAN) reports that some car owners abandoned their cars on the road, while others looked for where to park and trekked down to Agbara to take buses to their destinations.

NAN reports that contractor handling the reconstruction and rehabilitation of Lagos-Badagry express road, CGC Construction Ltd., had recently abandoned the project and removed its equipment from the site.

NAN also reports the Ibiye portion where the construction stopped had become headache for motorists plying the road because of potholes and heaps of sands abandoned in the area.

“This is the pain we passed through everyday on this road going to workshop. The contractor handling the project should have completed this portion perfectly before leaving the site.

“The motorists and commuters are the one suffering for this negligent now and we are spending over four hours daily on this portion along.

“I want to appeal the Federal Government to recall the contractor so that they can finish what they started,” he said.

Mr Isiaka Mojeed, a commercial bus driver said journey from Mile 2 to Badagry had become a nightmare for them due to traffic at Ajibade and Ibiye area of the road.

“The rainfall and abandonment of the road by the contractor at Ibiye bus stop made the road impassable making it difficult for smooth vehicular movement.

“Consequently, all vehicles are forced to manage a lane, while the other lane to Badagry has completely collapsed due to ongoing work on the lane coupled with rainfall making it so rough so vehicles to manoeuvre.

“This situation has continued to create gridlock on the spot causing untold hardships on us because this is where we get money to eat daily.

“On daily basis, the traffic is always between 6:00a.m. to 10:30a.m. The officials of Federal Road Safety Commission (FRSC) are always on the road around 8:30a.m to clear the gridlock.”

Mojeed called on Lagos State Government to come to the assistance of the commuters by putting palliative measures on the bad portion to ensure smooth movement on the road.

Mrs Elizabeth Avoseh, a bakery operator residing in Magbon, Badagry said she was losing a lot of money due to early morning traffic on the road.

“We are losing a huge amount of money as a result of gridlocks along Agbara Badagry expressway because must of customers that I used to supply bread have opted for another supplier.

“This is because I don’t come on time to supply them again.

“Although, we thank the government for the reconstruction of the road from Badagry to Ibiye area but the traffic at Ibiye area is killing.

“The government should attend to whatever is the problem so that the contractor can go back to site,” she said.