According to him, a monitoring exercise by the association revealed decorum and less traffic congestion along the Lekki-Epe Expressway,  starting from the 1004 Residential Estate. 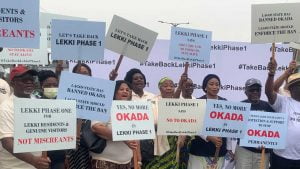 The Lekki Estate Residents and Stakeholders Association (LERSA) has asked the Lagos State Government to sustain the ban on the activities of commercial motorcycles in some parts of the state.

LERSA President, Mr James Emadoye, made the call in an interview with the News Agency of Nigeria (NAN) in Lagos.

According to him, a monitoring exercise by the association revealed decorum and less traffic congestion along the Lekki-Epe Expressway,  starting from the 1004 Residential Estate.

He said the development meant a plus for the policy and the effort of the state government to sanitise its motorways.

Emadoye also said that Nigerians should learn to do some more physical exercises, such as trekking.

He stated that though many might have to trek a few kilometres, the exercise would beneficial to overall health and wellness of the people.

“The roads were so free today and this ban is something that the government should sustain given the pluses that the scheme had recorded so far.

“I also laud the motorcyclists for their understanding so far as the areas were free from demonstrations and the likes,“ he said.

The Lagos State Government on Wednesday began the enforcement of the ban on commercial motorcycles from operating in six LGAs and nine Local Council Development Areas (LCDAs) of the state.