He said the payment of two million Swiss francs (2.07 million dollars) to former UEFA president Platini had gone through all due process at the world football governing body. 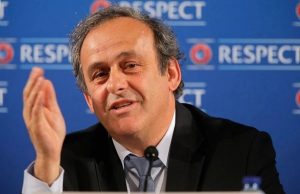 Former FIFA president Joseph Blatter has denied any wrongdoing as he faces a trial for fraud in Switzerland alongside Michel Platini, complaining about being pre-judged in the media.

It was “totally incomprehensible” for him that they were in court, Blatter said on Thursday at the Swiss Federal Criminal Court in Bellinzona.

He said the payment of two million Swiss francs (2.07 million dollars) to former UEFA president Platini had gone through all due process at the world football governing body.

“It is an owed, late payment of wages,” Blatter said. “It’s an administrative matter in an association and it will be dealt with according to civil law.”

Being questioned by a prosecutor in 2015 over allegations of fraud was something that caught him by surprise. “This shock has lasted seven years now, (and) this shock is still there,” Blatter said.

He said he had already faced the “maximum penalty” at the time, being “ostracised” in the world. “The media gave me a criminal record,” Blatter added.

The pair are charged with defrauding FIFA over the payment Platini received for work done as an advisor between 1998 and 2002, among other offences.

After his election as FIFA boss 1998, he had agreed to cooperate with Platini, Blatter said.

The latter had told him: “I am worth a million.”

In August 1999, a contract backdated to the beginning of the year was agreed with a salary of 300,000 Swiss francs.

When Platini pointed out that this was not the full amount agreed, Blatter said, “We’ll see about that later.”

In 2011, the sum of two million Swiss francs was invoiced by Platini, who is also scheduled to be questioned on Thursday before the first witnesses are also heard.

Blatter, 86, was originally scheduled to be questioned on Wednesday’s opening day of the trial but this was delayed due to his feeling unwell.

Both men protested their innocence ahead the trial over 11 days to June 22, with a verdict to follow on July 8.

There should be no sanction for holding a country’s passport, IOC president warns