Onu stressed the importance of promoting local content, local technologies and industralisation of the nation as being products of the Presidential Executive Order 5. 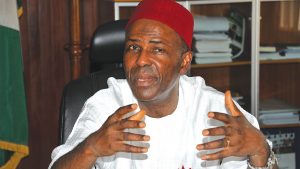 The Minister of Science, Technology and Innovation (STI), Dr Ogbonnaya Onu, has enjoined  the states of of the Federation and the FCT to emulate Anambra state government in promoting local content and indigenous technologies.

The Minister said this at the quarterly meeting with Directors-General, Permanent Secretary and Directors of the ministry in Abuja on Friday.

Onu stressed the importance of promoting local content, local technologies and industralisation of the nation as being products of the Presidential Executive Order 5.

He mentioned that the University of Transportation in Daura, Katsina, was also a product of the Executive Order 5.

Onu, who gave a breakdown of the achievements and policies developed by his ministry since the inception of his tenure in 2015, reiterated the role of STI in national development.

“We must remember that by 2015 we had only one policy which wasn’t fully implemented, the National Science Technology and Innovation policy, that was approved by the Federal Executive Council in 1986.

“ The lead organ, the National Research and Innovation Council that has the President as Chairman with as many as 16 ministers, and the private sector never met for a single day.

“ We must thank the President because as soon as I brought this to his attention, by Jan. 7, 2016, that council met for the first time in 30 years.

“Since then we have held nine meetings and we have had five additional policies and all the policies are doing so well,‘’ Onu said.

The minister said the National Strategy for Competitiveness in Raw Materials and Product Development has been very helpful.

He said that the policy helped to improve Nigeria’s ranking on the world stage so that in 2014 and 2015, according to the World Economic Forum assessment, Nigeria was ranked 127 out of 144 countries.

Onu disclosed that Nigeria’s ranking by the same forum had improved significantly in 2018 and 2019 to 115 out of 140 countries.

“As at today,  at the Cabinet Affairs Office, we have four memos, policy memos on Nano technology, welding and welding-related fields, policy on biosafety and revised energy policy.

“It’s not a matter of sending because we already have them there and we are working on artificial intelligence,’’ the minister said.

According to him, STI holds the key  to the development of the nation for the benefits of  all sectors of the economy.

He said there was no single ministry, be it infrastructural development, transportation, housing, education, environment, defence among others that STI would not have direct impact on its performance.