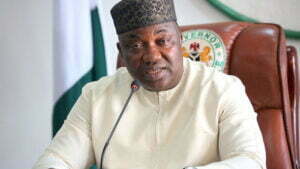 The two unions disclosed this on Thursday in Enugu during a joint press conference following the non implementation of the minimum wage to workers at the third tier of government.

They threatened a total shutdown of the local government system and primary school sub-sector in Enugu State, at the expiration of the ultimatum on July 28.

Recall that the state government had in February 2020 started the implementation of the new minimum wage in the state.

However, only workers in the core ministries of the state government and secondary school teachers were captured while others in Agencies and Departments and local government councils were left out.

On May 9, 2022, public primary school teachers in the state embarked on an indefinite strike which lasted for one month to press home their demand for the new wage.

However, the leadership of the NUT in a letter with reference no. NUT/ENS/GH/04/573 dated June 8, 2022 suspended the strike for just one month.

The NUT Chairman in the state, Chief Theophilus Odo had said that the suspension of the strike was due to the intervention of the state governor.

Odo had said that the one month timeline was to enable the state governor give a befitting consideration to the minimum wage saga for primary school teachers.

However, the NUT chairman said that it was sad that after six weeks of the suspension of the strike, there were no commitments by the local government chairmen to pay the new wage.

“If by Wednesday, July 27, 2022, the minimum wage with its consequential adjustment is not implemented, industrial harmony may not be guaranteed in the state.

“The two affected industrial unions in the state will proceed on strike,” he said.

Odo said that the NUT had done well to give the government over one month window to implement the new wage for workers in the two sectors.

“After a month and two weeks, nothing positive has emerged from government towards addressing the matter.

“Instead, the implementation is tactfully being delayed with unfulfilled promises that the issue would soon be over,” Odo said.

Also, the President of NULGE, Enugu State Chapter, Mr Kenneth Ugwueze, said that they needed the state governor to direct local government chairmen in the state to comply with the payment.

Ugwueze described the condition of most local government workers in the state as “pitiable”.

He said that most local government workers in the state were paid N18, 000.

He said that notwithstanding series of meetings with relevant authorities, reports of committees, consultations and appeals as well as a subsisting court judgment, the government had remained adamant.

Ugwueze urged workers in the local government system to prepare for the strike which he said would be total.

When contacted, the Special Adviser to the governor on Information, Mr Steve Oruruo told NAN that he would go to the Government House to find out government’s plan to avert the impending strike before responding.

Also, efforts to reach the Secretary to the State Government, Mr Simon Ortuanya, failed, as he did not respond to calls and messages put across to him.