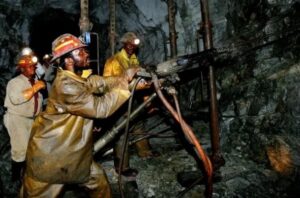 The Miners Association of Nigeria has called for collaboration between the Federal and State Governments toward harnessing the opportunities in the nation’s mining sector.

Its National Secretary, Mr Dele Ayanleke, made the call in an interview with the News Agency of Nigeria (NAN) on Tuesday in Ibadan.

According to him, only through collaboration, as against competition, that the country can benefit from the huge potential in the mining sector.

Ayanleke said that generally, there had been lack of government’s attention to the mining sector.

“In Oyo State, there is an agency called the Mineral Development Agency.

“One would expect that this agency will collaborate and partner well with the federal agencies in the state to develop the sector.

“Unfortunately, the sector is not feeling the impact of this agency, because the agency wants to be competing.

“As I know, they incorporated The Pacesetter Mineral Development Agency as a business venture, instead of paying more attention on how to generate revenue through derivation,” he said.

Ayanleke said that there were so many cluster markets where gemstones were being sold as Oyo State was blessed with so many gemstones.

He said that informed  construction of an international gemstone market would greatly profit the state and the nation at large.

The miner said it was unfortunate that the source of materials needed for this market to thrive had been abandoned.

“We have so many cluster mining sites in Oyo State such as the Olode Gemstone Market, where we have aquamarine; and in the North region of the state Itesiwaju, Iwajowa and Atisbo Local Government areas, we have a very large and dug mining sites.

“These places are very far and the road is not good and that is one of the  challenges.

“Also, there are so many infrastructure deficits such as social amenities, schools for children, because some people have already made those camps their homes.

“The major challenge is the issue of mining equipment. We have been calling on the Federal and State Governments to help us facilitate equipment to all those mining clusters.

“For instance, in Komu Mining site, there are between 13 and 15 mining companies registered and they are operating.

“Unfortunately, the depth of this site has gone down beyond the use of diggers and hammers, so we actually need equipment there,” Ayanleke said.

He said that government could facilitate those equipment through the public private partnerships so that the work could progress fast.

According to him, with this in place, the minerals will come out and the gemstones market being constructed will have a lot of materials to trade with.

“If this is done, it will be about a lot of development which will generate employment for our youths and boost government revenue.

“Apart from that, if you see the volume of trade starting from Ibadan to the mining sites, in terms of provisions and materials being used by residents of the mining sites, you will agree with me that if the sector is well developed, it will boost the economy.

“It has the potential of giving employment to youths, improving the commercial activities and a potential of reducing banditry that has become a national challenge in Nigeria now,” Ayanleke said.

He, however, decried lack of intervention to the mining sector during and post COVID-19 pandemic.

Ayanleke said that the association had made several efforts to get the Central Bank of Nigeria (CBN)’s intervention, but to no avail.