Buhari said the new inductions to the Naval fleet would boost their capabilities in securing Nigeria’s maritime domain. 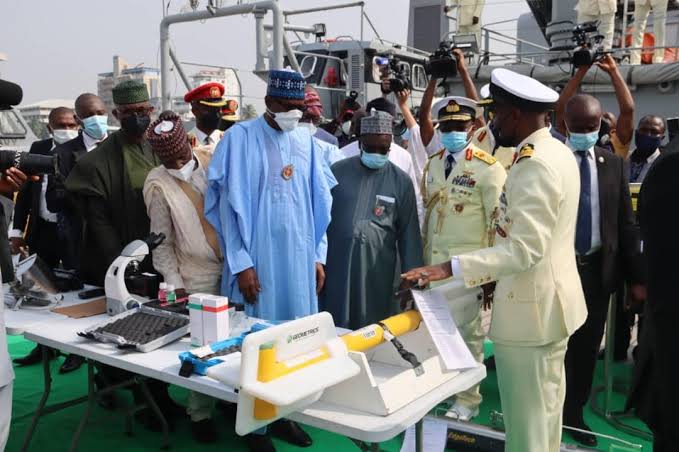 President Muhammadu Buhari, in the week under review, inaugurated a Seaward Defence Boat (SDB) III, built by the Nigerian Navy, as part measures to ensure maritime security in the nation’s waterways and the Gulf of Guinea.

The News Agency of Nigeria (NAN) reports that studies by maritime experts indicate that the Gulf of Guinea accounted for between 40 and 43 per cent of all the reported piracy incidents in so far in 2021.

The indigenously constructed SDB, NNS Oji, is the third in its series to be locally built at the Naval Dockyard Limited, Lagos,  solely by Naval engineers following the successes recorded in the building of NNS Adoni and NNS Karaduwa, inaugurated in 2016 by President Buhari.

Speaking at the event, which also marked the inauguration of some recently-acquired platforms and the keel-laying ceremony for the construction of Boat-IV and Boat-V, President Buhari said the new inductions to the Naval fleet would boost their capabilities in securing Nigeria’s maritime domain.

Also, while in Lagos on Thursday, the president attended the public presentation of ‘‘My Participation,” the autobiography of Chief Bisi Akande where he described the former Interim Chairman of the All Progressives Congress (APC) party as a ‘‘perfect public officer,” and the type of person he can go into the jungle with.

Buhari said the author had retained his ‘‘inflexible integrity,” in and out of public office, never accepting or offering bribes.

Speaking at the event, the president remarked that stronger partnership with the private sector would help in improving health facilities and access in the country.

According to him, the nation needs a healthy population to prosper.

It is believed that the landmark hospital project will significantly transform the healthcare sector in West African sub-region.

The president also on Tuesday met behind closed door with Gov. Hope Uzodinma of Imo in the Presidential Villa, Abuja.

Speaking to State House correspondents at the end of the meeting, the governor said he updated the president on security and socio-economic developments in his state.

He said, in response to his presentations, President Buhari pledged to do more to ensure adequate security of life and property of all citizens in the state and across the country, ahead of the yuletide season.

According to him, steps are being taken to address security challenges in the South-East region of the country.

Also on Dec. 7, when the Nigerian leader hosted Gen. Victor Sheiman, Special Envoy of President Alexandar Lukashenko of Belarus, Buhari assured that Nigeria would collaborate with the Republic of Belarus for the mutual benefit of both countries.

NAN reports that the new commissioners, Abdulazeez King, and Mohammed Baba, were sworn in by the president shortly before the commencement of the meeting of the Federal Executive Council (FEC) on Dec. 8.

The FEC meeting, presided over by the president, approved N1.8 billion for the deployment of regulatory systems in the Nigerian Telecommunications industry to tackle criminal activities.

The Council equally approved the sum of N965.9 million for the purchase of 49 operational vehicles to enhance the services of the Nigerian Correctional Service.

President Buhari had on Dec. 8, congratulated German Chancellor Olaf Scholz on his assumption of office after a successful election, bringing with him years of experience in leadership.

The president also congratulated former German Chancellor, Angela Merkel, for providing 16 years of strong and visionary leadership in her country.

He appreciated Merkel’s warm disposition to Africa, and Africans, and for paving the way for many development projects on the continent.

According to him, Merkel’s penchant for deepening democratic values and good governance, exemplified in the growing relations between Nigeria and Germany, remains one of her legacies in Africa.

He, however, expressed sadness over the recent gruesome attacks on innocent travelers in Sokoto State and also condemned the killing of Sylvester Oromoni, a student of Dowen College, Lagos State, saying all those implicated in the murder case would not be spared.

On Dec. 9, the Presidency dismissed the claims in some quarters that public servants would not get paid in December due to shortfall in budgetary allocations.

NAN reports that a circular which was purportedly issued by some agencies of the Federal Government, advised police officers and federal civil servants to spend their November salaries wisely because their December salaries may be delayed till January 2022.

However, Malam Garba Shehu, the Senior Special Assistant to the President on Media and Publicity, who spoke to State House correspondents on Thursday in Abuja, dismissed the circular, saying President Muhammadu Buhari’s administration “takes the issue of payment of salaries more seriously’’.

According to him, the Buhari administration attaches great importance to the welfare of its workers, especially the payment of their wages.

Also, President Buhari joined other world leaders in mourning  India’s Chief of Defence Staff, Gen. Bipin Rawat, his wife, and 11 others killed in a helicopter crash.

The president, in a message to the Indian Prime Minister, Narendra Modi, on Thursday, described the deaths as irreparable losses to the Indian military and the nation.

He condemned the reported assassination of the Katsina State Commissioner for Science and Technology, Dr Rabe Nasir, on Thursday evening.

The president, in a statement by his media aide, Malam Garba Shehu, late Thursday, described the killing of the commissioner as a heinous and condemnable act, adding that ”there is no place for such violence in our country.”

The president said he was deeply anguished by the tragic killing of this up and coming leader who had served his community, state and the nation with utmost diligence.

President Buhari, on Friday, received in audience the Governing Council of the Commission in the Presidential Villa, Abuja, where he assured the management of the Commission of his continuous support in its efforts to get closer to the people in order to assuage their grievances.

The president ended the week on Saturday evening when he hosted leaders of the Economic Community of West African States (ECOWAS) to a pre-Conference dinner at the Presidential Villa, ahead of the 60th Session of the bloc.

Those who attended the dinner included President of Ghana and Chairman of ECOWAS Authority, Nana Akufo-Addo; President of Togo, Faure Gnassingbe; and President Mohamed Bazoum of Niger Republic.