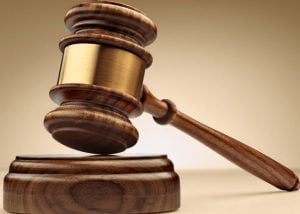 A 50-year-old man, Adamu Habib was on Tuesday sentenced to four months imprisonment by an Upper Area Court, Karu, Abuja for stealing two packs of ”Orbit” gum, worth N12,840.
The convict, who  resides in Garki Village,  pleaded guilty to theft.
Delivering judgment, the judge, Malam Ishaq Hassan gave the convict an option of N10,000 fine and warned him to desist from committing crime.
Hassan also ordered the convict to pay N12,840 in compensation.
The Prosecution Counsel, Mr Olarewaju Osho, told the court that the complainant, Joseph Sunday of “Faxx Supermarket, Abuja, reported the matter at the Durumi Police Station on Nov. 7.
Osho said on Oct. 18, the convict stole two packs of ”Orbit” gum, worth N12,840.
He said that during routine police investigation, the convict admitted to committing the offence.
The offence, he said,  contravened the provisions of Section 287 of the Penal Code
Editor’s Picks  Family Planning: FG to rely on donors to pay $4m debts — Enahire