“One of the things that we need to first understand is that the residents, the people that went to court and the police themselves are my subjects. So, I have the responsibility to ensure that fairness and equity are entrenched. 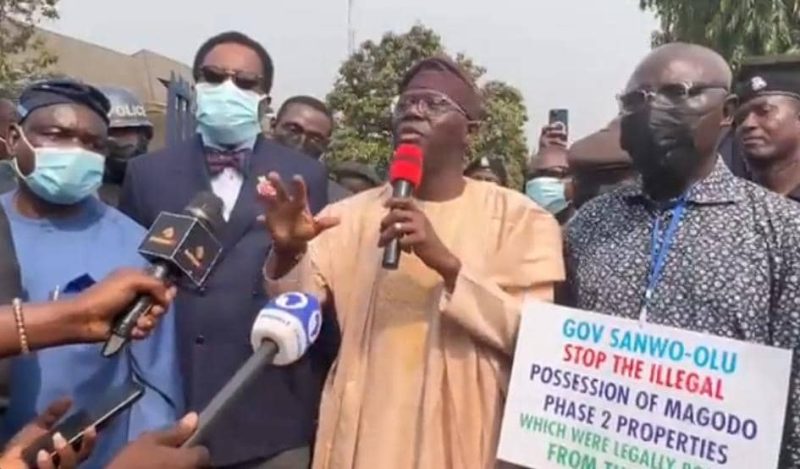 If all things go as promised by Governor Babajide Sanwo-Olu all critical stakeholders in the brewing Magodo GRA land crisis will commence meeting today to resolve all agitations and issues surrounding the judgement credit won at the supreme court since 2012 by the Shangisha landlords, represented by the Adeyiga Family.

On December 21, 2021, the Adeyiga family embarked on an aggressive move to forcefully seize 549 plots which the supreme court asked the Lagos State government to allocate to them using policemen brought in for Abuja and fierce-looking men to mark the supposed buildings. Alarmed, Magodo property owners and residents resisted the move insisting that they were title-holders to their plots allocated to them by the Lagos State government. They were forced to shut the estate gates when they spotted a bulldozer making its way in the evening later at night purported to commence the demolition of the marked houses.

The next morning all entry gates in Magodo remained shut as residents trooped out in protest calling on the state government to come to their rescue by settling with the Adeyiga family. This scenario was repeated on January 4, when Magodo residents yet again shut the estate gates with placard-carrying protesters blocking the entrances even as scores of retirees cried out for a speedy resolution of the crisis as their Magodo property was their only source of livelihood and abode.

Undeterred, however, the Adeyiga Family and their hired hands backed up by the Abuja police team, who had remained embedded at the Magodo Police Post since they arrived 2 weeks ago, resumed the markings and sealing of property at about noon after the protesters had dispersed. That was probably when Governor Sanwo-Olu took the decision to visit the estate and sort things out.

Upon arrival, the Governor tried to soothe frayed nerves as he said:  “My great residents of Magodo, I bring you good tidings. The chairman of the residents association, the Attorney General, other cabinet members and also the Assistant Inspector-General of Police are here.

“It’s difficult to start the New Year like this. It’s because of the importance of seeing to all of the information and lack of proper information that I had to take up this assignment myself.

“When the first incident happened about two weeks ago, I indeed intervened and If you remember very well, the action was immediately halted and there was no incident again. Throughout the festive period, we started communication.

“One of the things that we need to first understand is that the residents, the people that went to court and the police themselves are my subjects. So, I have the responsibility to ensure that fairness and equity are entrenched.

“The people that went to court have Supreme Court judgment while the residents living there(Magodo) have proper title and the means to live there.

“So, in the car, I had spoken extensively with the Inspector-General of Police and the Attorney General and we’ve resolved all of the issues.

“So, what we’ll see is that there is going to be a total stand down and tomorrow we’ll be inviting the representatives of the judgment creditors. We have actually started a committee, but I want to invite them again officially tomorrow by 11 O’clock to come over.

“The state government, the residents association and the police will be at the meeting so that whatever it is that brought about this trouble and headaches will be laid bare.”

The Governor expressed the belief that the meeting will address the issues and will help stakeholders to reach an amicable resolution.

“I want everyone to ensure that peace is restored in the estate and that citizens go about their lawful businesses, knowing fully well that nobody will be harassed, no property will be trampled upon pending when we reach a resolution,” he said.

Sanwo-Olu assured the residents, saying, “None of your houses will be marked again. For those marked, we’ll try and sort the situation out.”

No doubt, all parties are going into today’s meeting with bated breath but high hopes that the issues will be resolved once and for all, and justice and peace will be well served.

We must develop our communities to grow Nigeria in 2022 – Turaki