Oladeinde said there would be a total lane closure to allow the contractor work without any inhibition during the course of the construction. 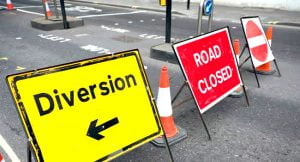 The Lagos State Government has announced the extension of traffic diversion on Murtala Mohammed Way from Wednesday until Sept 30.
The Commissioner for Transportation, Dr Frederic Oladeinde, made the disclosure in a statement in Lagos.
He stated that the diversion was due to the ongoing Phase 1 of the Lagos Rail Mass Transit project.
Oladeinde said there would be a total lane closure to allow the contractor work without any inhibition during the course of the construction.
He  also stated that traffic on Murtala Mohammed way would be diverted to Ojuelegba- Tejuosho slip road to link Murtala Mohammed Way.
The Commissioner assured that the site would be closed to ensure the safety, adding that emergency vehicles would be on ground to tow broken-down vehicles along the axis.
Don't miss
NEWS

He also stated that signage would be placed on the access roads with the State’s Traffic Management Authority to control movement and minimise inconveniences.
Oladeinde said that the state government was committed to the development of transport infrastructure within the Lagos metropolis, adding that the multi-modal transportation would in turn boost the economy of the people and residents of the  state.
In a related development, the government announced a traffic diversion plan for the construction of the Opebi-Ojota Link Bridge earlier inaugurated in the year by Gov. Babajide Sanwo-olu.
Oladeinde said that the construction would be in two stages to be completed in 16 months.

He added that the traffic diversion plans were designed to suit each phase as well.

”A portion had been created at the Sheraton-Opebi Link Bridge to enable Motorists make a U-turn into Opebi Road.

“Motorists from Mende Road are equally enjoined to use Ojota Interchange and connect Opebi via Ikorodu Road inwards Aderibigbe as the underpass will be closed off to vehicular movement,” Oladeinde said.

He also assured that the Lagos State Traffic Management Authority (LASTMA) would be deployed along the affected axis to ensure seamless movement.

The Transport Commissioner restated the administration’s commitment to developing alternatives for the citizenry  to reduce travel time and improve accessibility by eliminating congestion that hindered free flow of traffic.

He also said that the end results would be satisfying for Lagos residents.