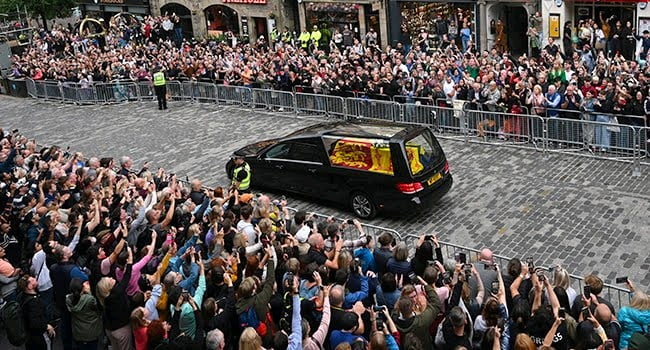 London will experience “unprecedented travel demand” in the coming days as people visit the capital to pay their respects to Queen Elizabeth II, transport bosses have warned.

Public transport users are being advised that the city will be “exceptionally busy” and they should expect Tube stations to temporarily close to avoid overcrowding.

Planning journeys in advance using the latest information “will be essential,” according to a joint statement by Network Rail, Transport for London (TfL) and industry body the Rail Delivery Group.

The organizations said: “As Her Majesty’s coffin travels to London to lie in state at the Palace of Westminster, it is expected that we will see unprecedented travel demand in the capital, especially from Wednesday Sept. 14.

“Transport providers have well-developed plans with extra staff and services coming on-stream to help people get to where they need to be.”

London Underground passengers are urged to avoid Green Park station “if possible” due to “high numbers of customers passing through.”

It is the nearest station to Buckingham Palace, but other nearby options include Victoria, Piccadilly Circus and St James’ Park.

A special service will run on the Elizabeth line railway between London’s Paddington and Abbey Wood on Sunday to ease the pressure on other parts of the transport network.

That section of the line – which was opened by the queen in May – is usually closed on Sundays due to testing and software updates.

Network Rail chairman Peter Hendy said: “The transport industry is working hard to help people pay their respects in London and across the United Kingdom.

“Please make sure you check before you travel as we expect the road and transport networks to be busy.”

London’s transport commissioner Andy Byford said: “At such an important and difficult time for the country, we are doing everything we can to ensure Londoners and visitors can pay their respects to Her Majesty the Queen and welcome His Majesty the King.

“We are working with our partners to keep our city moving smoothly and to ensure that everyone who needs to get around or is planning to attend the memorial events can do so safely.

“I would urge all customers to check before they travel, using the TfL website or TfL Go app, as while we’re planning to run a normal service, there may be short notice changes and diversions as a result of the large number of people travelling and necessary road closures.”

Hotel prices are up to four times higher on Sunday – the night before the funeral – compared with a week later, analysis by the PA news agency found.

Hundreds of thousands of people are expected to line the streets of the capital during the funeral at Westminster Abbey.

Many visitors travelling long distances will need to spend the night before in a hotel as the service begins at 11 am (1000 GMT).

But the cheapest room at Park Plaza County Hall – one of the closest hotels to Westminster Abbey – on Sunday night costs £1,299 ($1,520) compared with £269 seven days later.

Crowne Plaza London Albert Embankment is charging £708 on the eve of the funeral.

That is nearly three times more than on Sunday September 25, when the price is £244.

Rooms at Novotel London Waterloo cost £490 on Sunday and £241 a week later.

Many hotels near Westminster Abbey owned by lower-priced chains such as Premier Inn and Travelodge are fully booked for Sunday night.

Premier Inn has no rooms left at several of its sites, including London County Hall, London Waterloo (Westminster Bridge) and London Victoria.

The nearest location with availability is London Leicester Square, 1.2 miles from Westminster Abbey.

A one-night stay on Sunday is priced at £160, while someone visiting on September 25 will pay just £57.

A spokeswoman for Travelodge said: “As one of London’s largest hoteliers, our teams across our 78 London-based Travelodge hotels are working around the clock and gearing up for a busy period in the lead-up to the queen’s state funeral.

“Our Travelodge hotels in central London and Windsor are literally sold out, and demand is growing strong for our hotels situated near to a train or Tube station throughout Greater London.

“Our website is attracting visitors from all corners of the UK and across the globe.”