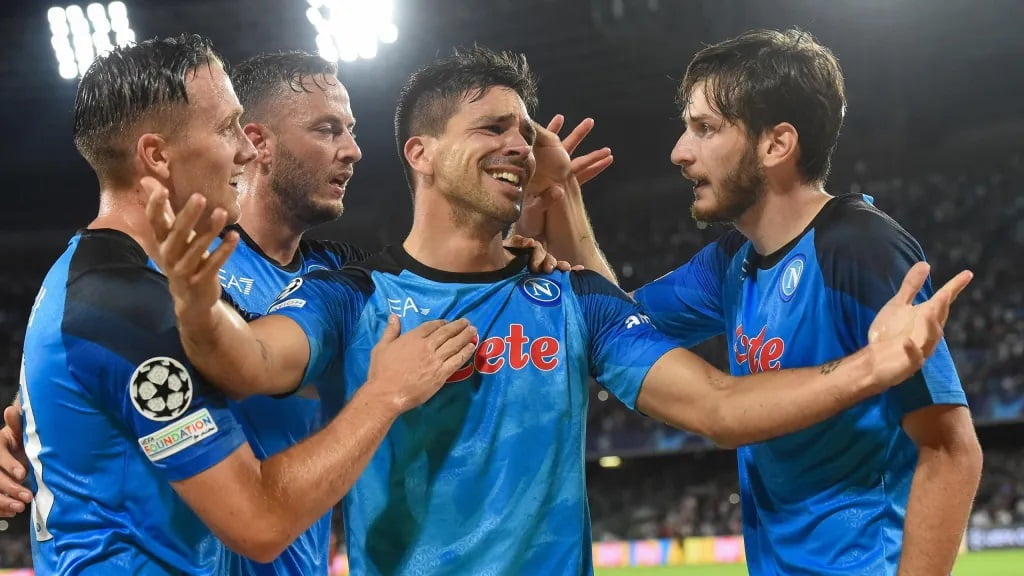 Liverpool, Champions League runners-up last season, suffered a shock 4-1 defeat by Napoli in their opening Group A game at the Diego Armando Maradona Stadium on Wednesday.

The Italian side were magnificent in the opening 45 minutes, going in 3-0 up at the break having opened up a woeful Liverpool defence at will.

Juergen Klopp’s team looked nothing like the side that reached the final last season, disorganised at the back and lacking any edge in midfield or attack.

Napoli have now beaten Liverpool on all three occassions they have hosted them in the competition’s group stage.

Luciano Spalletti’s side will now feel they have a real chance of getting out of a group that also features Ajax and Rangers.

Napoli were quick out of the blocks with Victor Osimhen hitting the post in the second minute and three minutes later they grabbed the lead.

This was when James Milner handled in the box and Piotr Zielinski converted the penalty.

Napoli were opening up Liverpool with ease and were awarded a second penalty when a VAR review ruled that Osimhen had been brought down by Virgil van Dijk.

The Napoli forward opted to take the kick himself but his effort was saved by Alisson Becker.

Van Dijk had to clear off the line to keep out an effort by the outstanding Khvicha Kvaratskhelia after Osimhen had robbed a struggling Joe Gomez.

Gomez lost out again leading to the second goal when Andre-Frank Zambo Anguissa played a quick one-two with Zielinski and slotted in off the inside of the post.

Liverpool had a brief spell of pressure, Van Dijk forcing a save out of Napoli keeper Alex Meret with a header and Harvey Elliott putting the ball wide from close range at the back post.

But Napoli were devastating in possession and substitute Giovanni Simeone made it 3-0 just before the break.

He slotted home after Kvaratskhelia had beaten Trent Alexander-Arnold and Joe Gomez before slipping the ball across.

Liverpool replaced Gomez with Joel Matip but within two minutes of the restart Napoli went 4-0 up.

Simeone found Zielinksi and the Pole’s shot was blocked by Alisson before he reacted sharply to poke the ball home.

Klopp’s side pulled a goal back two minutes later thanks to a fine curling shot from Luis Diaz but there was no way back for the English side.

“We were miles too open. You can’t come to a place like this and not be compact. They were by miles the better team,” said Liverpool left back Andy Robertson.

“Too many times they had spaces to run at us and cause us problems. You come away in the Champions League and you can’t be wide open like that.

“We have to get back to basics and be compact,” he added.

“We have to wake up and quickly because we can’t perform like that.”

For Napoli it was time to dream of more to come.

“It was almost the perfect match. We don’t know how far we can go from here,” said Zielinski.