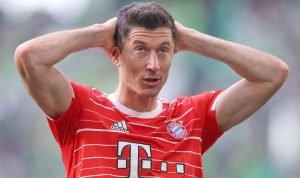 Current world footballer of the year Robert Lewandowski reported to Bayern Munich as expected for pre-season fitness checks on Tuesday.

This development is in spite of his wanting to force through a transfer to FC Barcelona this summer.

The Polish forward was seen, on a video, arriving at a Munich hospital for standard tests.

Recent media speculation wondered if Lewandowski would resort to a training strike in a bid to secure his move, though Bayern Munich club bosses had never expressed this fear.

Team captain Manuel Neuer and winger Leroy Sane are also expected back with Bayern Munich on Tuesday, completing their squad after the summer break.

Bayern Munich officials insist Lewandowski will remain part of the group until his contract expires in 2023.

Reports from Spain however say FC Barcelona will increase their offer for the player to a final 50 million euros (50.1 million dollars).

On Saturday Bayern Munich will present their squad to fans at the Allianz Arena before going to the U.S. for a week.

The season opens for the Bundesliga champions with the Super Cup against RB Leipzig on July 30.