Adefisayo, also the special guest of honour at the event, defined “Corporal Punishment as any punishment in which physical force is used and intended to cause some degree of pains or discomfort, however light”on the receiver. 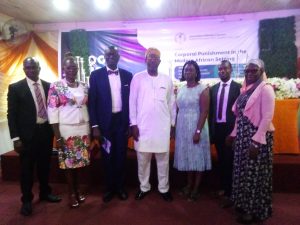 The Commissioner for Education in Lagos State, Mrs Folashade Adefisayo, says  that the state government has put a stop to all forms of corporal punishment in its public schools.

Adefisayo, represented by Mrs Adumasi Bosede, a Director in the Ministry, said this  at the scientific conference of the Association of Resident Doctors (ARD), Federal Neuro-psychiatric Hospital, Yaba in  Lagos State  on Wednesday.

The News Agency of Nigeria (NAN) reports that the theme of the programme is: “Corporal Punishment in the Modern African Setting”, with the Sub-theme: Examining the Scientific Evidence behind Corporal Punishment”

Adefisayo, also the special guest of honour at the event, defined “Corporal Punishment as any punishment in which physical force is used and intended to cause some degree of pains or discomfort, however light”on the receiver.

She decried the prevalence of corporal punishment in schools and homes, as the effects in most cases result to negative outcomes.

According to her, there are instances where  corporal punishment meted out to students have resulted to the  death of the child or student involved.

“There had been  occasions whereby corporal punishment given by  a teacher  to a child either in form of flogging or bullying  had eventually led to the the death of the child, thereby implicating the teacher.

“To avert such ugly incidents, including other negative effects of corporal punishment; there is a policy in Lagos State prohibiting teachers from inflicting coporal punishment on students and pupils in schools.

“Meanwhile, there are other alternative ways to discipline and correct children, which are being adopted in the schools,” she said.

The President of ARD, Dr Samuel Aladejare, described coporal punishment as one of the burning issues in the society now, as it was prevalent in schools, homes and even workplaces.

In his welcome address, Aladejare said that there was  the need to urgently address the issue, with a view to putting  an end to all forms corporal punishment in the society.

“The scientific conference is one of the programmes used by the association to identify, discuss and proffer solutions to burning issues in the society through the help of seasoned experts and professionals in the medical field.

“So, I am convinced that the invited guests, experts, academics and professionals here today will adequately deliberate on the topics,” Aladejare said.

Dr Tolulope Bella-Awusah, Head of Department,Child and Adolescent Psychiatry, UCH, Ibadan, said that corporal punishment was not good for the mental health and brain functioning of a child.

Bella-Awusah, also a guest-speaker at the event, said that what children needed was discipline and not punishment.

According to her, in the society corporal punishment is used to train, discipline and correct misbehaviours among children.

“Scientifically, using corporal punishment such as flogging or beating is not an effective way to correct children, because it makes them to be aggressive, drug abusers or stubborn in life.

“So, there is no need to beat children with the intention to correct them because its effects will manifest later in their lives,” she said.

A consultant psychiatrist at the Federal  Neuro-psychiatric Hospital, Yaba, Dr Olugbenga Owoeye, said that deprivation of social  privilege measures could be used to correct and discipline children rather than corporal punishment.

According to him, parents, teachers and caregivers can deprive the child of certain privileges if the child fails to do what is expected of him or her.

The Director-General, Nigeria Institute of Medical Research (NIMR), Dr Babatunde Salako, said that corporal punishment had become a societal norm, which would be difficult to stop.

“The truth is that there are some bad behaviours, which if you do not apply corporal punishment, such a  child may not stop nor change from his or her bad habits.

“No matter what you do, people will still lock up their children and beat them if they do bad things. So, there is  the need for more scientific evidence to the reasons why corporal punishment must be stopped,” Salako said.