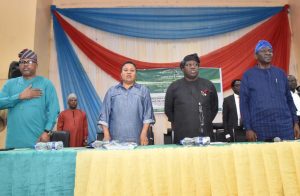 The Lagos State Government on Wednesday said the upgrade and reconstruction of the Old Ojo Road would decongest the Lagos-Badagry Expressway.
This, according to the government, will help to reduce the hardship of residents on the axis.
The Commissioner for Physical Planning and Urban Development, Mr Omotayo Bamgbose-Martins, said these in Alausa, Ikeja.
He spoke at a stakeholders’ meeting on the reconstruction of Old Ojo Road (Phase 1), in Amuwo Odofin Local Government.
Bamgbose-Martins said the project would be done in two phases.
He said that the first phase, which is four kilometers, would decongest the Lagos-Badagry Expressway and enhance the social and economic well-being of people on the axis.
The News Agency of Nigeria (NAN) reports that the first phase of the project, awarded in July 2022 to Messrs CCECC Nigeria Ltd with 18 months completion period, spans from Irede Road to Oluti Bus Stop.
The Old Ojo Road, located in Oriade area of the council, is a 7,650m single carriageway dilapidated surfaced road to be reconstructed into a dual carriageway.
It will serve as a strategic by-pass for motorists from Kirikiri Area/Ajeromi Ifelodun to Ojo Local Government Area via Irede (Abule Oshun) Road.
It is also parallel to Lagos-Badagry Expressway from Mazamaza to Trade Fair.
The commissioner said the project was in line with the THEMES agenda of the Gov. Babajide Sanwo-Olu-led administration to make Lagos a 21st century economy.
He said that the project would complement the ongoing Lagos-Badagry Expressway project to ease connectivity among communities in Ajeromi-Ifelodun, Amuwo-Odofin and Ojo sections of the Badagry division of Lagos State.
He urged residents to take ownership of the project, cooperate and support the contractors.
The commissioner appealed to them to be patient, promising that government would pay compensation to owners of buildings affected by the project.
Bamgbose-Martins advised Lagos residents to always respect physical planning laws and stop building on the Right of Ways (RoWs) and public spaces, to avoid loss of lives and property.
“May I also take this opportunity to urge citizens to respect Physical Planning laws so that together we can avoid incessant building collapse and loss of lives.
“I am inclined to urge you all to maintain vigilance in your environment and ensure that people act correctly by building right,” he said.
Special Adviser to the Governor on Works and Infrastructure, Mrs Aramide Adeyoye, also said the upgrade of the 7,650 metres Old Ojo Road to dual carriageway would be done in two phases.
Adeyoye said rigid pavement construction, which is more durable, would be adopted to accommodate heavy duty vehicles on the axis.
She said that 65 per cent of petroleum products that serve the nation pass through the corridor.
The special adviser, however, lamented  vandalism of drain cover slabs, removal of iron roads used in construction, permanent blockade by trucks, cows trampling to damage fresh construction and other infractions on the axis.
“To break slabs, to remove iron rods used for the construction is not good,” she said.
Adeyoye responded to concerns of residents of Satellite Town and other communities on the menace of tank farms, containers and trucks in the area.
She promised to continually engage with federal agencies towards resolving the issues.
Adeyoye said the state government was not in charge of allocation of tank farms.
She also spoke on efforts to increase fire stations on the axis.
Stakeholders at the meeting thanked the state government for the project.
The Special Adviser to the Governor on eGIS and Planning Matters, Mr Olajide Babatunde and Permanent Secretary, Mrs Abiola Kosegbe, were among those present at the meeting.
Sign in
Welcome! Log into your account
Forgot your password? Get help
Password recovery
Recover your password
A password will be e-mailed to you.