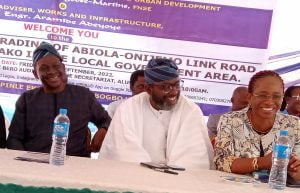 The Lagos State Government on Friday assured residents of Ifako-Ijaiye Local Government of the improved connectivity with the construction/upgrading of Abiola-Onijemo Link Road with Bridge, linking four communities.
The Commissioner for Physical Planning and Urban Development, Mr Omotayo Bamgbose-Martins said this in Alausa, at a stakeholders engagement.
Bamgbose-Martins said the project traverses a swampy terrain and would serve as a strategic link from College Road through Ajayi Street, Ogba to Aruna/Obawole/Iju-Ishaga in Ifako-Ijalye Local Government Area and Ojodu Local Government.
The commissioner, who spoke in Yoruba language, said the project was aimed at reducing travel time through improved interconnectivity while the drainage components would address flooding.
He said the stakeholders meeting was convened to intimate the residents on the proposed construction, solicit their support and get their feedback on the project.
“By the time we finish this construction, your community will look like Ikoyi,” he said.
Explaining the project scope, he said there would be need to demolish some properties on the Right of Way (RoW), to be able to deliver a world class road.
He said that the Gov. Babajide Sanwo-Olu-led administration was diligent in payment of compensation.
The commissioner urged the stakeholders to submit documents for property marked for demolition for timely disbursements.
He said the construction was in line with the greater Lagos vision of the government for enhancement of transportation/traffic flow according to the T.H.E.M.E.S. agenda.
Bamgbose-Martins appealed to residents to report infractions resulting in building collapse to stop the ugly trend.
He urged the stakeholders to always build right by getting requisite approvals before embarking on construction.
The Special Adviser to Gov. Sanwo-Olu on Works and Infrastructure, Mrs Aramide Adeyoye, thanked the residents for their patience while waiting for the award of the project.
Adeyoye said the government was caring and had mobilised the contractor for speedy execution of the project.
She said that, in line with local content law, the contractors would employ residents willing to work on the site.
The Permanent Secretary, Office of Infrastructure, Mr Olufemi Daramola, while giving a brief of the project, said the construction would eliminate use of makeshift bridges between communities.
He listed services that needed to be relocated for smooth execution of the project with 18 months completion period.
Daramola solicited support of the residents for the contractors towards timely completion of the project.
Lawmaker representing Ifako-Ijaiye 1 Constituency in the Lagos State House of Assembly, Mr Adewale Temitope, thanked the government for the road which had been pursued by the council for about 12 years.
“This road had been abandoned for years and caused so much hardship,” he said.
Temitope said that people in the constituency were law abiding and thankful, and would support the contractors for timely completion of the project.
The lawmaker reeled out other projects being considered for award in the council for seamless connectivity, to eradicate gridlock on the axis.
Stakeholders from the various communities and traditional rulers took turns to thank the government, pledging their support for the much-anticipated project.
They pleaded that the government enumerators be lenient in determining level of infractions against planning laws.
According to them, this is because most people had lived in the communities for over 40 years, long before development came to the axis.
The News Agency of Nigeria (NAN) reports that the contract for the Construction of Abiola-Onijemo Link Road with Bridge was awarded to Messrs GELD Construction Ltd in May 2022.
The project will comprise 643m road with 7.3metres main carriageway, 7.3metres bridge and a four-metre Slip Road.
Sign in
Welcome! Log into your account
Forgot your password? Get help
Password recovery
Recover your password
A password will be e-mailed to you.