Olusanya quoted the Federal Ministry of Agriculture and Rural Development as saying that Nigeria consumed 380,000 tonnes of honey worth N36.8 billion annually, 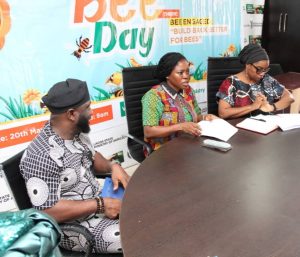 Lagos State Government is to train about 150 women and youths to bridge gaps in the bee keeping and honey production, packaging and marketing value chain.

The state Commissioner for Agriculture, Ms Abisola Olusanya,  gave the assurance at a news conference on Friday at Alausa, Ikeja, to commemorate 2022 World Bee Day.

The News Agency of Nigeria (NAN) reports that the 2022 World Bee Day had the theme: “Bee Engaged: Build Back Better for Bees.’’

Olusanya quoted the Federal Ministry of Agriculture and Rural Development as saying that Nigeria consumed 380,000 tonnes of honey worth N36.8 billion annually,

She noted that only 15,000 metric tonnes were produced locally, thereby resulting in massive importation.

Olusanya said that the shortfall was augmented by importations from Europe and Asia.

According to the official,  the importation resulted in increase in  prices of imported honey and other hive products.

She said that the role of bees in agriculture and economic development could not be over-emphasised.

The commissioner said that bees did not only contribute to pollination of wildflowers, but also to play a huge role in the pollination of agricultural crops.

She said  that without bees, there would be a decline in the pollination of economic crops.

She quoted the Food and Agriculture Organisation (FAO) as saying that contribution of honey-associated pollination accounted for between 235 billion dollars and 577 billion dollars of global food production.

The official urged bee-keeping awareness as well as awareness on the importance of bee-derived products.

“As we all know, the most valuable and economically-important product from bees is honey which is used in most homes nowadays in replacement of sugar.

“Another important product derived from bees is the wax used to make wood and leather polishes, candles and additives in artist’s materials while it is also used in pharmaceuticals and cosmetics.

“You will, therefore, agree that honey bees are important for food, medicine and other economic benefits in agriculture.

“Today, bees are endangered due to habitat loss, deforestation and de-vegetation, pesticides, bacteria and other anthropogenic reasons,” she said.

The commissioner also quoted the Federal Ministry of Agriculture and Rural Development as saying that consumption of honey annually in Nigeria was valued at about N36.8 billion.

The commissioner said that arrangements had been concluded by the state Gov. Babajide Sanwo-Olu for  training of about 150 people on bee-keeping and honey production, packaging and marketing.

She said that interested applicants had already picked up forms, adding that successful candidates would undergo an intensive training on the value chain, from May 30 to June 3.

Olusanya said that trainees would be empowered with beehives, bee suits, smokers, harvesting knives, bowls and kegs to enable them to start on an easy note.

She said that at the end of the  training, the beneficiaries would be expected to appreciate the importance of bees and bee-keeping, honey production, packaging and marketing for the improvement of honey value chain.

Olusanya said that the initiative would further consolidate the present administration’s commitment to empowering women and youths for economic prosperity in line with its T.H.E.M.E.S Agenda.

“As we join the rest of the world to celebrate World Bee Day, Gov. Babajide Sanwo-Olu has put in place arrangements to train 150 women and youths in the art of bee keeping and honey production, packaging and marketing.

“Since many people are unable to afford this imported product, some people have taken undue advantage to produce adulterated and low-quality honey or use sugar and other industrial by-products to produce honey.

“This unwholesome act is not unconnected with several health challenges being witnessed such as complications in diabetes and cancer-related illnesses.

“In order to control and reduce importation, improve the quality of honey being produced and ensure that adulterated honey is flushed out of our system, is imperative that the narrative changes from what it used to be, to a brand new system that allows for training of our teeming youth and women for human capital development in line with Gov. Babajide Sanwo-Olu’s T.H.E.M.E.S Agenda.”

World Bee Day was first celebrated on May 20, 2018, to acknowledge the role of bees and other pollinators in the ecosystem.