The project is supported by the Lagos State Government, British High Commission 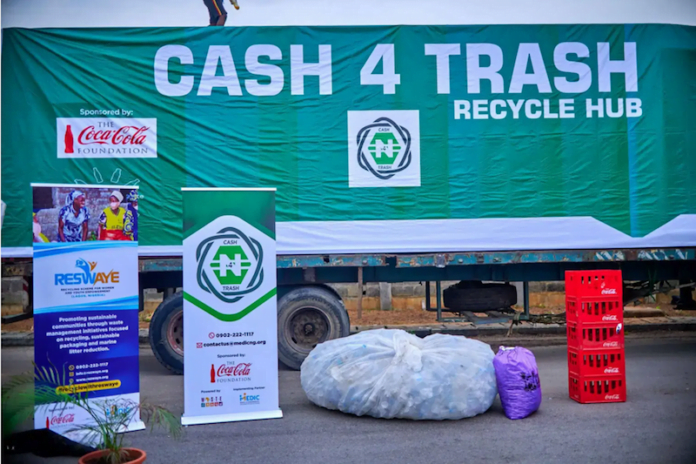 The Lagos state government has launched the  Cash4trash initiative aimed at reducing the impact of polyethylene terephthalate (PET) bottles in the environment. The launch took place recently in Abesan community, a suburb community in Alimosho Local Government Area of Lagos.

The project is supported by the Lagos State Government, British High Commission. The project is part of the initiative for the advancement of waste management in Africa.

Speaking at the launch, the representative of the Lagos State Ministry of Environment, Assistant Director, Mrs. Oyekunle Olabisi, noted that “one of Governor Sanwo-Olu’s key agenda is recycling and circular economy. We want to go to communities and put recycling hubs there, so we can collect PET bottles because they are an issue in the state as whenever it rains flooding our drainage systems.”

Also speaking at the inauguration of the project and training for participants, the CEO, EMR consulting, Olawunmi Ogunde, said the project was part of the state government’s effort to empower rural women across the state. “It was the community that requested for the project and the opportunity for the recycling hub within the estate came about. So, this project is the need for the community as one of the biggest estates in the state. “Recycling is one of those things the Lagos State Government is particularly interested in as it is one of the mandates for the governor.”

On the financial modalities of the project, she explained that “using Abesan as a pilot, generally within the recycling community for PTE; it can vary between N10 to N30 per kilogram which depends on the location, collection model, and how often they collect. They can get more based on the volume that is generated.”

As part of the project, a designated collection hub in the community will serve as a receiving centre for the project in partnership with PSP operators, commenting about the project, the President, Abesan Estate Residents Association (AERA) said the project came to light as a result of the struggle to rid their Estate of filth in general and refuse.

Carnival Calabar suspended by Gov. Ayade due to new COVID-19…