According to him, the feedback from the workshop will enrich the document and form a basis for a robust upgrading document for the Lagos State Government consideration and investment. 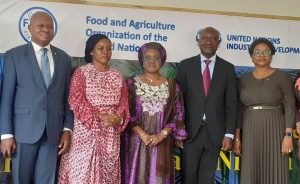 The  proposed figure is contained in a document presented to stakeholders in the coconut value chain at a validation workshop for the Development of the Coconut Value Chain on Tuesday in Lagos.

The document titled: “The Executive Summary of the Startegy Document and Discussion,” was presented at the event by Mr Severin Oman, FAO representative.

In his goodwill message, Mr Fred Kafeero, the FAO Representative to Nigeria, said that the Lagos State Government had demonstrated high commitment to agricultural development and attainment of combination of appropriate policies in the agriculture sector.

Kafeero said that the main purpose of the meeting was to validate the draft upgrading report.

According to him, the feedback from the workshop will enrich the document and form a basis for a robust upgrading document for the Lagos State Government consideration and investment.

“It is my conviction that once validated and formally endorsed by the government, the document will form an important instrument in forging strong partnership between the state government, FAO and UNIDO.

“It will also initiate the development of a shared vision and core strategic options for the value chain development.

“I am pleased to be part of this very important validation workshop where the draft report of the strategy document for the upgrading of Coconut Value Chain Development in Lagos State is to be validated.

“It is worthy mentioning here that the I am, therefore, happy that the Lagos State Government has taken the initiative to develop the coconut value chain.

“The Lagos State Government together with the FAO is co-financing the initial phase of the project.

The first phase of the project includes the analysis of the value chain to identify constraints and opportunities and develop concrete actions for the upgrading of the coconut value chain.

Bakole said that this would boost the development of its agribusiness and agro-industry sector as well as promote its economic diversification programmes.

“I thank Governor of Lagos State and his deputy and the Commissioner for Agriculture for making frantic efforts to diversify the economy of the state by focusing on the agricultural sector and initiating this laudable project.

“It is really heart-warming to note that the state government has accorded the sector and particularly the agro-industry/agribusiness development, as one of the key drivers of its economic diversification programmes.

“I also want to commend the consultants who were engaged in the field survey and the development of the draft Lagos/FAO/UNIDO Coconut Value Chain Strategic Intervention Document.

“I am very happy to participate in this workshop to validate, improve and discuss the strategy document and way forward,” he said.

Mrs Shade Jaji, Secretary to the Lagos State Government, said that the state government was reviving the coconut plantations as well as supporting farmers in line with its THEMES agenda.

Ms Abisola Olusanya, the Commissioner for Agriculture, said that Lagos has the potential to grow 10 million coconut trees in five years in line with its Agricultural and Food System Roadmap (2021–2025).

Olusanya said that the successful implementation of the value chain analysis project document would ensure the sustainable development of the coconut sub-sector and the agricultural sector in general in the state.

She noted that the state government was fully committed to unlocking the potential of coconut and ensure that it competes withglobal coconut economies of the world.

Olusanya added that the state would provide the necessary support and an enabling environment for private businesses in the coconut value chain to thrive successfully.

“I hereby use this medium to call on prospective investors both foreign and local, as well as, the private sector to come into this space.

“The state will provide the necessary support and an enabling environment for your businesses in the coconut value chain to thrive successfully.

“I also want to assure our stakeholders, value chain actors and prospective investors that the state government is fully committed to unlocking the potential of coconut to compete with global coconut economies of the world,” she said.

She noted that one of the cardinal programmes of the state was the provision of world-class agricultural facilities to support its teeming population.