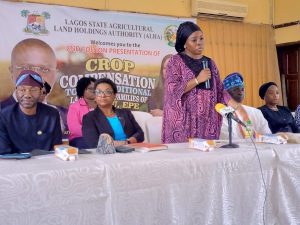 The state Commissioner of Agriculture, Ms Abisola Olusanya, made this known at the presentation of cheques to the beneficiaries on Tuesday in Lagos.

Olusanya said that the compensation was for 500 hectares of lands acquired to revitalise food production.

She said that the payment was for crops and not for the lands.

Olusanya noted that the programme was intended to make the state a food production hub and purveyor of modern agricultural system.

“It is a worthy and epic occasion where the traditional land owning families are billed to be compensated by the state government for the acquisition of their lands.

“The lands fall under the schedule of agricultural zoning and acquisition in the government land master plan and official gazette.

“It is pertinent to unequivocally mention that the state government developed agricultural roadmap with a view to ensuring massive agricultural investment.

“The aim is to promote growth and communal development leveraging on private sector and modern technologies in order to drastically reduce cost of production amongst the farming communities by improving on the farm estate.

“It will create a dynamic structure that promotes favourable farming environment for the participation of private investors in order to reduce poverty in line with sustainable development goals of 2030,” she said.

Olusanya added that the compensation programme acknowledges the synergy between traditional land owners and the state government which would in turn provide the allottees assurance of peaceful co-existence among all parties.

She noted that it would also bring development to rural areas of the state.

“Permit me to emphasise the fact that the acquisition of land is not just for the monetary value but for creation of jobs for the various areas.

“No doubt, that the participation of private investors in this scheme will promote labour and rapidly develop these areas with other attendant benefits such as increasing farm income and the preservation of the environment.

“The scheme will also stabilise the ecosystem for the future.

“The facilitation of this noble and laudable scheme will also help in preventing encroachment by land speculators and increase the morale of beneficiaries (farmers) leading to boost in food production,” she added.

She commended all the land owners’ families for collaborating and joining forces with the state government in order to revolutionalise and enhance profound agricultural development.

Mr Oladapo Are, the General Manager, Lagos State Agricultural Land Holdings Authority, said over N75 million had been paid as crops compensation for 100 hectares of lands to family owners from 2021 till date.

Are said that the exercise was a very long process of consultation, meetings and registration of qualified families.

Mr Hassan Elias, a representative of Elias Ogunlaja family, commended the state government for the prompt payment of the compensation.

Elias urged the state government to ensure that the intention behind the project was fulfilled.

“We are happy with this development because families will get employment and there will be job opportunities,” he said.