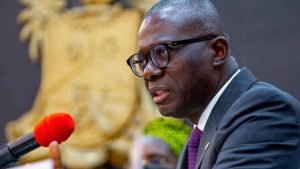 Gov. Babajide Sanwo-Olu of Lagos State, on Thursday, said that the Lagos Court of Arbitration (LCA) formed an integral part of the state’s commitment to promoting and upholding the rule of law.

Sanwo-Olu made this known at the Sixth Africa Conference on International Arbitration, organised by the International Chamber of Commerce (ICC) in Lagos.

The conference had the theme: “African Arbitration: Consolidation and Transformation”.

The governor, who was represented by the state’s Attorney-General and Commissioner for Justice, Mr Moyosore Onigbanjo (SAN), said that Lagos State remained an arbitration-friendly destination.

“Apart from this bill, Lagos State is an arbitration-friendly destination.

“In addition to enhancing the Arbitration Law (Laws of Lagos State), the state established Lagos Court of Arbitration (LCA), National Centre for Arbitration and ADR, as a dispute resolution hub with the aim of promoting and servicing domestic, regional, continental and international commercial dispute industry, with a full complement of ADR services,” he said.

According to him, the state’s judiciary had partnered with the LCA in helping to ensure  prompt out-of-court resolution of disputes.

“Lagos State Judiciary has partnered with the Lagos Court of Arbitration for resolution of long-standing court cases.

“LCA is an integral part of our promise to promote the rule of law built as a pillar for economic development not just in Lagos but in Nigeria and Africa in general,” he said.

According to him, Lagos State is a major commercial hub, holding about 65 per cent of Nigeria’s total industrial investment and foreign trade.

He said that such commercial activities could generate arbitration activities.

“With over 3,000 manufacturing industries and more than 400 financial institutions, Lagos currently holds about 65% of the federation’s total industrial investment and foreign trade while also attracting 70% of Nigeria’s commercial activities.

“Africa is currently an attractive investment destination, and influx of foreign investors who insist on arbitration as their preferred dispute settlement mechanism has increased international commercial arbitration,” he said.

Sanwo-Olu  urged the ICC conference to address issues such as challenges of arbitrating in Nigeria and what a country must do to become an attractive destination.

“This conference is, therefore, an opportunity to value the African experience and prospects for arbitration,” he said.

NAN reports that the event also had in attendance, the President of ICC, Claudia Salomon; President of Nigerian Bar Association, Mr Olumide Akpata; Chairperson of the ICC, Nigeria, Mrs Dorothy Ufot; and many other dignitaries.