He said labour was set for a showdown should the government fail to keep to the Memorandum of Understanding (MoU) entered into with the workers. 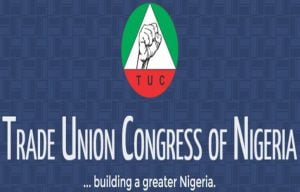 The Trade Union Congress (TUC), Cross River chapter, has warned of an impending industrial action in the state over issues bothering of workers welfare.

The Chairman of the union in the state, Mr Monday Ogbodum, issued the warning in an interview with the News Agency of Nigeria (NAN) in Calabar on Monday.

Ogbodum said that the the Gov. Ben Ayade’s administration had placed the state workers’ welfare on the “back-burner.”

He said labour was set for a showdown should the government fail to keep to the Memorandum of Understanding (MoU) entered into with the workers.

He listed payment of gratuity, incremental and minimum wage as well as promotion implementation as some of the contentious issues.

The TUC chairman said while retired state workers were being owed gratuities from 2014 till date, those of local government were from 2012 till date.

“The agreement we had with government was that N50 million would be released monthly to offset the payments.

“But goverment realised only N200 million (releases for four months) whereas about N232 million was needed to effectively cover a month’s gratuities.

“Although they promised and started to implement promotions that have been outstanding since 2016, they stopped all of a sudden while that of local government has yet to commence.

“Similarly, we are also awaiting the full Implementation of the minimum wage as negotiated by stakeholders, including the state government,” he said.

The chairman told NAN that the major issue was the yet-to-be released balance of N100 million out of the N250 million negotiated and agreed upon by stakeholders, including the government.

He said labour agreed with government that workers on salary grade levels one to six would enjoy full minimum wage while those on grade levels seven to 17 would percentage increases as consequential adjustment, depending on their levels.

He added: “Everything was worked out and it amounted to N250 million and the government could only release N150 million at that time, with the promise to release the balance once the economy improved.

“It’s been almost three years after and we have yet to get this balance. If the economy has yet to improve why embark on frivolous spending?

“The workers also have issues with yearly incremental that have been outstanding since 2012 during the administration of Liyel Imoke.”

Ogbodum said that the MoU stipulated August as the timeline for the implementation of the agreement.

“The government has a window period till August to fulfill the agreement entered into in the MoU or leave us with no option than to go on strike,” he stated.

UNHCR calls for solidarity for 77,000 Cameroonian refugees in Nigeria