He stated that the first phase of the project has the capacity to produce 60,000 litres per day of different formulations of IV fluids and medication, using best practices and adhering to global standards. 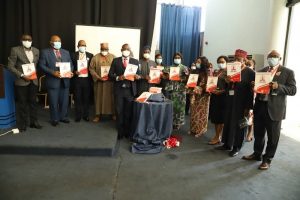 Healthcare delivery received a boost on Tuesday in Kwara with the inaugof a Medication and Intravenous (IV) Fluid Manufacturing complex worth $15 million.

An indigenous firm, HMA Medical Ltd, established the factory at Ogbondoroko in Asa Local Government Area of the state.

Mr Damilola Shittu, the Executive Director of the company, said at the occasion that it has the capacity to produce over 500 million syringes and over 1 billion needles per annum.

He stated that the first phase of the project has the capacity to produce 60,000 litres per day of different formulations of IV fluids and medication, using best practices and adhering to global standards.

“Presently our group employs about 1,000 people directly. Our five-year plan has a potential of employing about 2,000 more Nigerians directly while attracting over $100 million in foreign direct invesent,” he said.

Shittu explained that the group is creating a value chain in the pharmaceutical industry.

He observed that Nigeria imports all her vaccines, majority of medications, and almost all medical devices and equipment consumed by the citizenry despite having a vast amount of raw materials available locally.

“Our vision is to make Nigeria a hub for Sterile Medical Devices, Fluid and Medication in Africa,” he said.

Mrs Roselyn Ajayi, the South West Coordinator of National Agency for Food and Drugs Administration and Control (NAFDAC), confirmed that the company had complied with all necessary requirements of the agency.

She stated that NAFDAC was committed to encouraging and mentoring local pharmaceutical outfits on manufacturing medical consumables for the country.

In his remark, Oba Adeyeye Ogunwusi, Ojaja ll, the Oni of Ife, commended the establishment of the pharmaceutical company, saying it will bring more development to the community, state and the nation as a whole.

According to him, the founders of the pharmaceutical firm had made the country proud, while appealing for Nigerians in diaspora to come and establish more manufacturing industries in the country.

In his appreciative remark, Mr Kayode Alabi, the Kwara Deputy Governor, commended the state government for consistently ensuring and providing enabling environment to attract the interest of investors.

“We encourage collaboration, partnership and mutual relationship towards the provision of deliverable to the citizens in reaching Goal 17 of the United Nations,” he said.