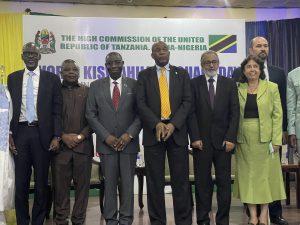 Some African envoys and citizens have said that the adoption of Kiswahili as the continent’s working language would facilitate the effective implementation of the African Continental Free Trade Agreement (AfCFTA) and cross-border trade.

They made this known on Thursday, in Abuja at the inaugural commemoration of the World Kiswahili Language Day organised by the Tanzanian High Commission, Abuja.

They commended the unanimous adoption of Kiswahili as the AU official language by African leaders, noting that it would strengthen the  integration and unity of the continent.

Mr Pule Mphothwe, Bostwana’s High Commissioner to Nigeria, said that it called for celebration that Africa now had a unifying language which would also ease trading among African citizens, an objectives of the AfCFTA.

“Swahili is a global international language, one of the main languages, If not the main language in Africa because it is spoken by over 200 million people which is almost the population of Nigeria.

“Across sixteen countries in the great lakes, Eastern, and Southern African region as well as in other African countries.

“So it calls for celebration because it has been recognized as a working language of the African Union as well as the Southern African Development Community.

“And also, UNESCO has found it fit to have a special day to commemorate this language. Language as a unifying factor and I think Kiswahili is a contribution to the globe by Africa.

“The language is in the curriculum of a lot of schools, it is now taught across the continent in Primary schools, secondary schools and tertiary institutions.

“It will help ease passage and also ease the initiation of the AfCFTA, for those who are trading.I think it is a positive plus for the AfCFTA so that people can converse in a similar language.

In the same vein, Mr Stanislas Kamanzi, Rwanda High Commissioner to Nigeria and Maxwell Ranga, Ambassador of Zimbabwe to Nigeria, also commended the initiative which they described as a win for the continent.

They reiterated that among the many benefits, endorsing Kiswahili as Africa’s working language would facilitate the implementation of the AfCFTA as citizens will be able to communicate in one voice.

Esther Eghobamiem-Msheila, Founder Women Arise Development and Humanitarian Initiative (WADHI), said that the adoption of a common language in the African region will break the language barriers encountered by African women traders.

Eghobamiem-Msheila, who commended the initiative said that also responds to article 14 of the UN convention on the elimination of discrimination against women which seeks to open spaces for rural women in particular.

“By launching a day for Kiswahili and making it a language that is acceptable on so many platforms, it means that you are actually expanding trade opportunities, social inclusion for women in particular.

“Because they are the greater percentage of women in the rural communities and language constitutes one of the barriers for trade and export.

“It is opening up spaces for women because the concerns that we have, not only as Women arise but as gender activists is that women are locked out because they are unable to communicate and with Customs officials at the border, trade officials, trade negotiators.

“So once you make Swahili language official, I am sure by general average of the 250 million people who are now said to be speaking Swahili, a very conservative 49 per cent or 50 per cent will be women.

“And that means that you are giving that population greater access so that the can be better players in the AfCFTA,” Esther Eghobamiem-Msheila said.

Also, Tanzania’s High Commissioner to Nigeria, Benson Bana, sad that the commemoration created a platform for experts to share knowledge and discuss the benefit of this Africa’s adopted working language.

“At the level of the High Commission, the inaugural celebration of the World Kiswahili Language Day 2022 revolves around the theme “Kiswahili Language for the promotion and Consolidation of Africa integration.

“Under this banner, is the open dialogue which is nested in the theme. The interactive and inclusive dialogue is intended to create an avenue for sharing knowledge and experience on five mutually supportive area;

“The contribution of Kiswahili in African Liberation struggles, for sustainable nation building (experience from Tanzania), realizing the objectives of the AfCFTA.

Mr Sule Bassi, Secretary, Nigerian in Diaspora Commission (NIDCOM) reiterated the benefit of the continent being binded by a common language, adding that it will foster regional integration.

Bassi, however, noted that it is high time Africans played down on the colonial languages; English, French and Portuguese to bring up African indigenous languages.