According to her, the Disbursement Linked Indicator (DLI 1.1) social transfer is the disbursement of N10, 000 monthly to the aged, critically ill, urban poor and the physically challenged, using the existing platform of the state cash transfer unit for implementation 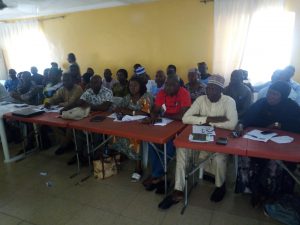 No fewer than 950 vulnerable households will benefit from the social transfer (DLI 1.1) intervention under the Kogi State COVID-19 Action Recovery and Economic Stimulus (KG-CARES).

Hajia Falilat Abdulrazaq, Head of Delivery Platform for Social Transfer and Livelihood Support Grant (DLI 1.1 & 1.3) KG-CARES, disclosed this on Sunday in Lokoja, at a sensitisation and orientation training for 63 facilitators and GROs on Social Transfer (DLI 1.1) across the state.­

According to her, the Disbursement Linked Indicator (DLI 1.1) social transfer is the disbursement of N10, 000 monthly to the aged, critically ill, urban poor and the physically challenged, using the existing platform of the state cash transfer unit for implementation.

She noted that the workshop was to build the capacity of the facilitators to move into the  field for validation, and enrollment of beneficiaries using the existing state’s social register.

She said that the programme was initiated to cushion the economic hardships as a result of COVID-19 pandemic across the 21 local areas of the state.

“We are training the facilitators from the 21 local government areas of the state on social transfer who are going to be the foot soldiers of the programme at the local and community levels,” she said.

Also speaking, Haruna Mohammed Sanni, the State Coordinator of NG-CARES, Kogi State, said the programme was the initiative of the Federal Government alongside the 36 states’ governments in collaboration with the World Bank.

According to him, in 2020, people could neither go out to source for their daily income, nor go to farm, market due to COVID-19 pandemic which aggravated the level of poverty across the world including Nigeria.

He added that NG-CARES was conceived to cushion the effects of COVID-19 pandemic, categorised under three result areas to reduce the economic hardships of the poor and vulnerable citizens.

He said that the Livelihood Grant Support (DLI 1.3) was aimed at providing a start-up grant to economically active population to sustain their livelihood due to COVID-19 hardships.

Sanni said that the NG-CARES generally targeted the poor and vulnerable as well as farmers to provide inputs, processing equipment and extension services to them.

He noted that the NG-CARES is based on ‘Performance for Results’ (P for R) as the State Government would spend its own resources to deliver results, after which the world bank will review the performance before reimbursement of the state.

In her remarks, the state’s Commissioner for Women Affairs and Social Development, Hajia Fatima Buba, commended the State and the Federal Government for the gesture aimed at lifting citizens out of poverty due to COVID-19 pandemic.

Represented by the Ministry’s acting Permanent Secretary, Mr Emmanuel Allenclay, the commissioner urged the participants to take the assignment very seriously in order to achieve its intended purpose.

One of the participants, Mr Usman Yusuf, said the training had enhanced their learning and built their capacity on the job for effective performance and commended the governments for the initiative.