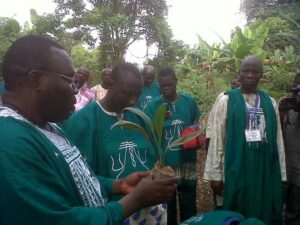 The National Headquarters of the Kegites Club of Nigeria says it is committed to the promotion of African culture and tradition.

Its sitting National Chief, Peter Omotunde, made this known to newsmen on Tuesday at the Kegite Shrine, University of Ibadan.

The News Agency of Nigeria (NAN) reports that the club, established in 1972, held the news conference to kick start its 50th anniversary.

The club recently registered the Kegites Club of Nigeria with the Corporate Affairs Commission (CAC) to further develop on the ideas of the founding fathers of the club in UI.

NAN reports that Omotunde addressed newsmen alongside the Chairman of 50th Anniversary Committee, Lekan Osiade; an Associate Professor in the University of Maiduguri, Biodun Ojo and an Associate Editor with Nigerian Tribune, Sam Nwaoko.

Omotunde said that the 50th anniversary was aimed at celebrating the contributions of the founding fathers and advance the promotion of African culture.

“The celebration of the 50 years of Kegites Club in the University of Ibadan, which we are kick-starting today, is a worthy tribute to the contributions of our fathers.

“Historically, Kegites Club National Headquarters, which had existed before 1972, when it was so named, had initially born Kegites Confraternity.

“The sole aim was to use African songs, folklore and other elements of Africanity to encourage university undergraduates of that era everywhere to maintain their Africaness,” he said.

Omotunde said that they preach peace, love and mutual respect among other variants of the club, adding that they were open to relationship with youths everywhere in the world.

In his remarks, Osiade said the National shrine of the club in the institution would be given a facelift, adding that many projects would be done to promote African culture.

He said that the club was apolitical and non-religious, pointing out that it was formed to promote African culture as well as tradition.

Osiade said that the year-long event would feature seminar, symposium, charity works and other humanitarian efforts aimed at promoting culture and tradition.

Ojo and Nwaoko, in their separate remarks, said that the club was not into partisan politics, noting that it would never queue behind any political party.

The duo said that they could only encourage Nigerians to get their permanent voter cards (PVCs), be law abiding and vote for candidates of their choice during the 2023 general elections.

NAN reports that the vision of the club was to celebrate African culture and tradition among youths in the University of Ibadan.

As at then was a confirmation that the substance of Nigerian youths in the universities of yore as agents of the promotion of the fraternal love expounded in their culture and tradition.