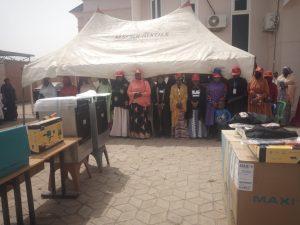 Ari made the assertion on Wednesday in Sokoto at the graduation ceremony of and distribution of start-up packs to beneficiaries of  the 2021 National Industrial Skills Development Programme (NISDP).

He said that equipping Nigerians with technical skills acquisition was a solution to tackling increasing unemployment in the country.

He observed that Nigerians were averse to skills acquisition which could create more jobs and reduce to the barest minimum the issue of unemployment confronting the nation.

According to him,  ITF is the leading human capital development institution in the country and has commenced the process of repositioning its programmes and activities.

He listed NISDP, Women Skills Empowerment Programme (WOSEP), and Agri-preneurship Skills as some of the skill intervention programmes implemented by the fund.

He said efforts were made to prepare the nation’s workforce in line with the Fund’s mandate of developing a pool of qualified Nigerians to man the public and private sectors of the national economy.

He explained that the ITF was committed to doing the same with equal or even greater impact, given the centrality of human capital development to the actualisation of the different empowerment plans as it had achieved previously.

Ari appealed to state governments and private sectors to intensify effort in complementing the Federal Government’s effort of ensuring job creation in the country.

In his remark, the Sokoto Area Manager of ITF, Mr Dauda Mshelizah, said that technical skills were integral to the growth and development of any society across the globe.

Mshelizah explained that effective utilisation of the skill acquisition model remained the most sustainable antidote to poverty and unemployment as well as a veritable catalyst to economic growth and development.

He said distribution of start-up packs after the three months training was to enable graduands to start their businesses in their respective areas and urged them not sell the items.

Earlier, Gov. Aminu Tambuwal of Sokoto State, commended ITF and the Federal Government on the efforts and assured continued partnership for the benefits of the citizens.

Tambuwal, represented by the Sokoto State Commissioner for Commerce and Industry, Alhaji Bashir Gudado Jegawa, added that the move would go a long way in assisting the state government’s effort  to create jobs  for sustainable development.

Some of the beneficiaries, Malam Mustapha Bello and Hauwa’u Muhammad, expressed gratitude over the support and assured judicious  utilisation of the items to enhance their well-being.