According to Malpass, effective allocation of capital, promotion of growth and production and keeping markets open are some actions global community could take to address the situation. 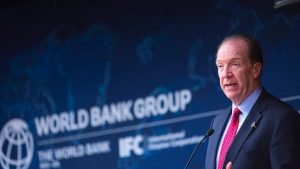 Malpass said this in his speech at the Warsaw School of Economics in Poland ahead of the 2022 Spring Meetings titled “Addressing Challenges to Growth, Security and Stability’’.

The session was monitored virtually by the News Agency of Nigeria (NAN).

He said millions of people were suffering amid massive reversals in development.

According to Malpass, effective allocation of capital, promotion of growth and production and keeping markets open are some actions global community could take to address the situation.

He said that the overlapping global crises were resulting to a weak economic outlook.

According to him, the violence is unfortunately not confined to Ukraine.

“Just over the last year, we have witnessed serious setbacks for development and security, including Afghanistan’s collapse, Lebanon’s crisis, and coups and violence across the Sahel, Ethiopia, Somalia, and Yemen.

“Millions of Syrians are living in refugee camps in Jordan, Lebanon, and Turkey. Inter-ethnic and inter-religious strife plagues Myanmar and other parts of Asia.

“And in Latin America and the Caribbean, levels of crime and violence are alarmingly high, with some urban and rural areas controlled by criminal gangs or drug cartels.

“The trend toward insecurity is deeply concerning. This year, 39 of the 189 member countries of the World Bank Group are experiencing open conflict situations or remain worryingly fragile,’’ Malpass said.

He said that the number of people living in conflict areas nearly doubled between 2007 and 2020.

“Today, in the Middle East and North Africa, one in every five people lives in an area affected by conflict.

“This unraveling of security has brought a surge in the number of refugees, which more than doubled over the last decade to exceed 30 million refugees in 2020,’’ he said.

Malpass however, said that each of the ongoing crises hits the vulnerable the hardest, often women and girls.

He said “on the economic front, trends are not encouraging. Prior to the war in Ukraine, the recovery in 2022 was already losing momentum due to rising inflation and lingering supply bottlenecks.

“While advanced economies were expected to return almost to their pre-pandemic growth rates in 2023, developing economies were lagging substantially behind,’’ he said.

Malpass said that the war in Ukraine and the COVID-19 lockdowns in China were further reducing the recovery path.

According to him, of concern, the repercussions are worsening the inequality as the war affects commodity and financial markets, trade, and migration linkages, and investor and consumer confidence.

“Advanced economies with well-developed social protection systems are cushioning parts of their populations from the damage from inflation and trade blockages, but poorer countries have limited fiscal resources and weaker systems to support those in need.

“Adding to the burden, developing country debt has risen sharply to a 50-year high—at roughly 250 per cent of government revenues.

“Debt vulnerabilities are particularly acute in low-income countries, where 60 per cent are already experiencing or at high risk of debt distress,’’ he said.

Malpass further said that most emerging markets and developing economies were ill-prepared to face the coming debt shock.

“Exposures to financial sector risk are opaque at this point, but one measure, the cost of insuring against default in emerging markets, has reached its highest point since the onset of the pandemic,’’ he said.

Malpass, however, included steadfast commitment to security and stability as part of measures to address the situation.

“In the alternative, security crises trigger massive increases in poverty and decimate the middle class,’’ he said.