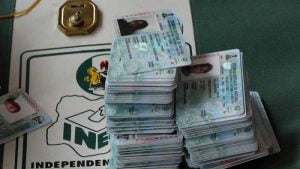 The Independent National Electoral Commission (INEC) has called on Nigerians to begin early collection and checking of their Permanent voters Cards (PVCs) to avoid rushing.

Alhaji Yahaya Bello, FCT INEC Resident Electoral Commissioner (REC), made the call on Thursday in Abuja at a news conference.

Bello said the main purpose of the news conference was to inform Nigerians on the issue of the display of the voters’ register.

He said that from Nov. 12, INEC would begin to display the register for the purpose of claims and objections.

“Residents could go through the register in their respective localities and see if there are issues so they can raise them.

“This is to ensure that our register is cleaned; this display is going to start from 9a.m to 3p.m daily at the registration areas or ward levels.

“We have concluded the CVR and a lot of people partook in it, it is on record that we have devised new means which is a departure from the previous election,” he said.

Bello said all those who partook in the registration were being identified and notified through SMS to come and collect their PVCs.

He said that the response had been great especially INEC partnership with Yaiga Africa, a CSO devoting its time for enhancement of participation in the electoral process.

“Before we started this SMS process ,there’s low PVC in all the area councils as low as low 15 collection daily even in AMAC .

Bello said the process was to help Nigerians depart from the fire brigade approach of the past.

He said INEC had developed so many technologies to make the election credible and more transparent.

He, therefore, encouraged Nigerians to also follow INEC’s example by collecting their PVCs instead of waiting till the 11th hour .

Bello said it was the responsibility of political parties to engage in voter education to enlighten people on the use of technology in election and the changes thereof to avoid violence, ballot theft, among others.

He said it would no longer be business as usual because violence would add no value to the electoral process due to the introduction of technology.

“It was done in Ekiti, Osun ,Anambra ,so political parties have no choice but to focus on issue-based campaigns and woo voters instead of planning to engage in political violence,” he said.