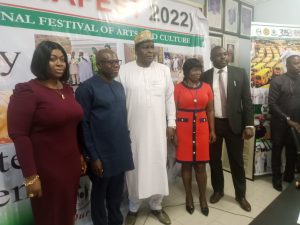 The National Council for Arts and Culture (NCAC) has called on the IBB International Golf and Country Club to patronise Made-in-Nigeria products in its tournament to celebrate 62nd Nigeria Independence Anniversary.

The Director-General of NCAC, Otunba Olusegun Runsewe, gave the advice on Tuesday when the Chairman, Independence Planning Committee of the Club, Dr Banjo Obaleye, paid him a courtesy visit in his office in Abuja.

Runsewe pleaded with the committee to ensure that local materials were sewed for jackets for golfers who would participate in the tournament, adding that the committee should also focus on Nigerian cuisines.

According to him, this will not only promote arts and culture, but it will also enhance jobs creation and boost the Nigerian economy.

“Let me plead with you, because I don’t know what your plans are. The jackets, if it is possible, we should use local materials.

“Let me start by saying that I’m happy that you are sewing the jackets in Nigeria so that our tailors will get jobs.

“The materials, for instance, as you know me very well, I don’t play golf with foreign materials. I use local materials to play golf.

“I use to say that If there are over three million golf fans in Nigeria; if all of us should patronise our tailors, we will be adding value to them,’’ NCAC boss said.

He said that the council would support the club in organising cultural exhibition to showcase the nation’s arts and crafts to the world.

“For the exhibition, I want to assure you that we will take charge of the entire 36 states and the Federal Capital Territory.

“At the corridor of IBB Golf, we will make sure that every state is being represented.

“If we don’t do that for you, others will take over the space and sell Nigeria from the wrong angle which will not be of our interest,’’Runsewe said.

According to him, what IBB International Golf and Country Club was doing was a ”story awakening us to our consciousness of unity of our country.

“If Oct. 1st comes and goes without doing anything, I want to tell you the danger, all those embassies will say what is wrong with our country.

“But, if there are activities going on, the negative stories can be overcome with positive ones which will make a lot of difference.

“So, for me, IBB Golf Club has made an impact in developing and making Nigeria to be seen in the right angle,’’he said.

Earlier, Obaleye, who is also Vice Captain of the club, said the visit was to seek the NCAC support for the independence tournament, aimed at developing sports and tourism in the country.

“Independence tournament is the biggest event in the history or calendar of the club every year.

“This year is not going to be an exception. We are going to start with rider cobbler match play between Nigerian community and International community and a winner of that tournament will have a trophy.

“Again, the winner of the overall tournament will have a jacket and we will equally prepare a jacket for past winner,’’he said.

Obaleye said that the club was planning to have exhibition of arts and culture aimed at showcasing Nigeria’s heritage.

He added that Korean Embassy has indicated interest to participate in the cultural exhibition.

According to him, IBB International Golf and Country Club is a premier club in Abuja and the major focus is to develop sports and tourism in Nigeria.

“It is also aimed at showing our cultures to a very big global community.

”The club has numerous national teams that represent the expatriate and local community,’’he said.