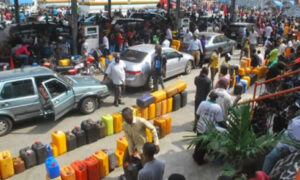 Residents of Ibadan and other major towns in Oyo State have continued to grapple with fuel scarcity, as it bites harder due to lack of supply to Ibadan depots, the News Agency of Nigeria (NAN) gathered.

NAN Correspondent, who monitored the situation on Tuesday reports that many residents in Ibadan, decried the unnecessary hardship they were subjected to in getting petrol.

It also reports that as the scarcity was bitting harder in major parts of Ibadan, and the neighbouring towns, the situation forced many people to spend hours unend at the filling stations.

Recounting his ordeals, Mr Akinola Akinkunmi, an Artisan, said, having gone round many filling stations in Ibadan, with no luck, he was forced to buy petrol at N200 per litre at a filling station.

“The suffering is too much. I have gone round the town looking for fuel to buy, but I didn’t get it, as many stations I visited were not opened for business.

“The few ones selling at the official rate have long queues and they don’t sell into jerry cans.

“I was only able to buy at a place for N200 per litre. Some are even selling as high as N300 per litre,” Akinkunmi said.

Also, Mrs Omolara Aina, a mother of two, said it was becoming difficult for her to take her children to school on daily because of the scarcity.

“My husband spent a greater part of Monday queuing for petrol; we hope respite is on the way, because we cannot continue like this.

“Foods stored in the refrigerators had spoiled, yet things are very expensive now because transportation had increased as a result of the fuel scarcity.

“The hardship caused by COVID-19 pandemic is still lingering, but now, it is getting to the climax with the fuel scarcity, I tell you,” Aina said.

Also, Mr Ade Ojo, a commercial driver, said he spent about seven hours on a queue waiting to buy fuel, but managed to get the product at the official rate at the end.

“Do you think with all the hassles I went through, I will not double or even triple the transport fare?

“Life is difficult for residents now with the fuel scarcity. The heat is too much; you need to power your generator because electricity is not available, even at that, where is the petrol to power the generator ?

“Let the government walk its talk and make the product available as they had lpromised,” Ojo said.

Kayode said that he has nothin option than to charge his passenger 0high fare to recover his money.

Meanwhile, Mr Tayo Aluko, an official of the Nigerian Midstream and Downstream Petroleum Regulatory Authorities (NMDPRA), said the agency had been going round to ensure that the product was sold at the official rate.

“Ibadan Depot has no supply of PMS. The product available in Ibadan is from Lagos and that is why some filling stations were selling above the official rate.

“We are now going round monitoring and sanctioning those who were found wanting in complying with the laid down regulations,” Aluko said.

Meanwhile, the Oyo state Command of the Nigerian Security and Civil Defence Corps (NSCDC), had on Monday threatened to arrest and prosecute fuel marketers who were hoarding the product or selling above the approved pump price.

The state Commandant, Michael Adaralewa, had warned, at a news briefing and parade of fraud suspects in Ibadan, fuel marketers to desist from imposing “artificial scarcity” on the people.