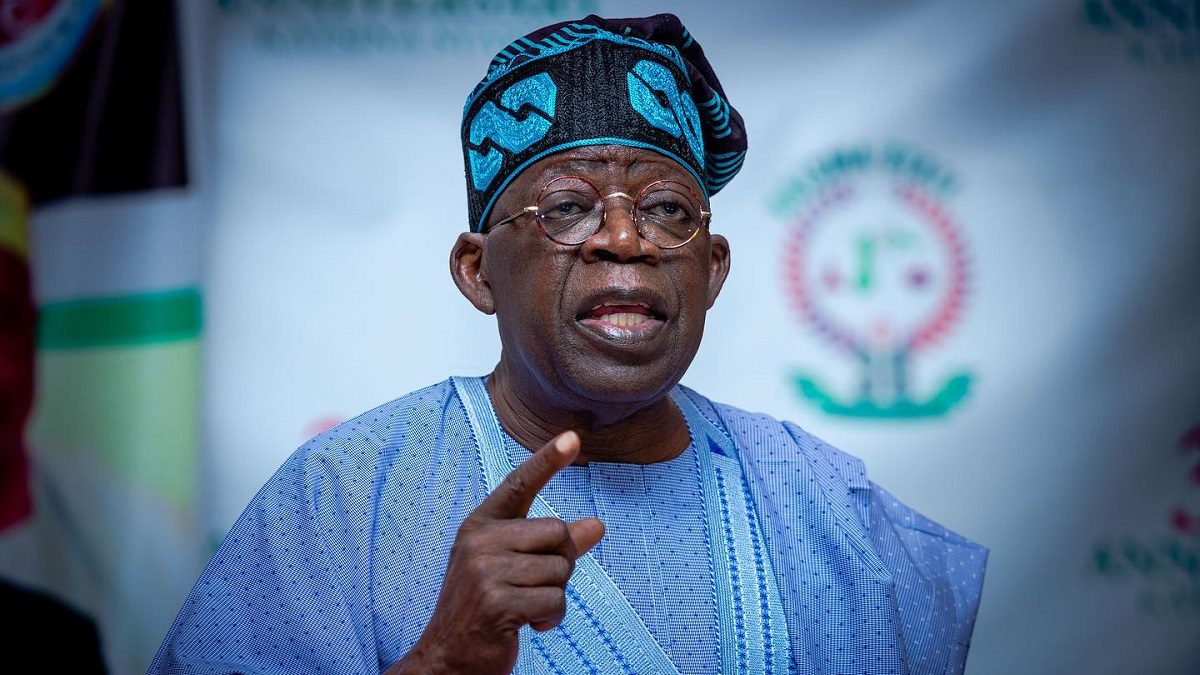 Asiwaju Bola Tinubu, the All Progressives Congress (APC), Presidential Candidate for 2023 poll, says he has no disagreement with the party’s National Chairman, Sen. Abdullahi Adamu, contrary to some media reports.
Tinubu said this when he spoke with newsmen after a visit to the APC National Secretariat in Abuja on Wednesday.
He described the reports as fake news.
“To the rumour manufacturers, I read in some papers about disagreement between myself and the chairman and that was a very big lie.
“They didn’t know that we have come a long way, the big masquerade dance not in the cage, but in the market square, and that is what Adamu use to be, full of wisdom.
“We were governors together, before God put us together on this project again, he is going to deliver as the party’s chairman for me to become Nigeria’s president, and I am very confident of that.
“They can say whatever they want to say, throw all the jabs they want, we are a party strongly determined to fulfil our dreams of turning Nigeria to a very progressive, highly developed, prosperous country,” he said.
Tinubu said that since his emergence as the APC Presidential Candidate, he has working as a progressive toward ensuring victory at the poll.
He said that the APC was determined to change Nigeria into an advance country with bright future for Nigerians.
“It is a matter of great joy and honour for us to be here, especially me in particular, to interact with the team that authorised my becoming the candidate of our party.
“To all the members in attendance that day, we want to say thank you, we have come together as a political party and we have taken progressivism as our doctrine.
“We have to be progressive in our thinking, our did and objective to serve the country,” Tinubu said.
He said that the APC was not threatened by opposition parties, in its quest for victory at the 2023 general election as it was committed to democratic and progressive principles.
“We are not threatened, we are committed to democratic principles and values, we are not bickering in any way,” the former two-term governor of Lagos State said.
This, he said, could not be said about other political parties which according to him, have been spewing fake statistics and wrong figures to Nigerians.
He thanked the party’s leadership and delegates for voting him as the presidential candidate in the March 26 presidential primaries.
He particularly thanked Adamu for his wisdom, support and cooperation over the years, saying that they had come a long way, even as former state governors.
Tinubu said that his visit was to strategies for the presidential campaign, ahead of the Sept.28 commencement date with the party’s leadership with a view to ensuring effective electioneering campaign.

“Yes, I admit that democracy is challenging, very hard and difficult a system to manage.
“We have seen challenges left and right outside international sphere of politics, but we are determined to ensure that we democratise Nigeria fully and remain a beckon of democracy as the largest nation of black race in the world,” he said.
He appealed to members of the party that may not be part of the presidential campaign team to be patient and to continue working for victory at all levels.
“I beg you not to be angry if you are left out because we are going to give you another responsibility. Not every member here can be a member of the presidential campaign council,” Tinubu said.
Earlier, Adamu expressed optimism that the APC would emerge victorious at the 2023 poll by God’s grace.
Some of the dignitaries accompanying Tinubu were his running mate, Sen. Kashim Shettima and the Director-General APC Presidential Campaign Council, Gov. Simon Lalong of Plateau.
Others were Speaker House of Representatives, Femi Gbajabiamila and Secretary of the Campaign Council, James Faleke.