Yet he added that working with the Saudis was a “once-in-a-lifetime opportunity to reshape how the PGA Tour operates”. 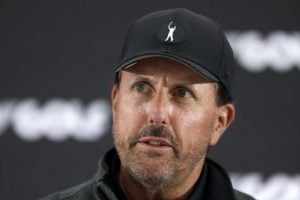 Mickelson described the Saudis as “scary m************” and said he was well aware of Saudi Arabia’s “horrible record on human rights” —- including the murder of Washington Post reporter Jamal Khashoggi”.

Yet he added that working with the Saudis was a “once-in-a-lifetime opportunity to reshape how the PGA Tour operates”.

The American golfer also accused the Tour of “obnoxious greed”.

Speaking at a press conference on Wednesday, Mickelson said: “I don’t condone human rights violations at all. I’m certainly aware of what has happened with Jamal Khashoggi and I think it’s terrible.

“I have also seen the good that the game of golf has done throughout history and I believe LIV Golf is going to do a lot of good for the game as well.”

While a number of players have resigned from the PGA Tour in order to compete in the LIV Golf events, Mickelson said he had no intention of following suit.

“I earned my lifetime membership and I don’t want to give that up. I don’t believe I should have to,” the six-time major winner added.

“I don’t know what’s going to happen, but I have earned that (lifetime membership) and I don’t plan on just giving that up.”

Mickelson refused to confirm or deny if he had been suspended, or currently was, from the PGA Tour.

“I choose not to speak publicly on PGA Tour issues at this time,” he said.

The golfer also declined to confirm if he is receiving 200 million dollars to compete in the LIV Golf events, but his answer indicated that the reported amount may well be accurate.

“I feel that contract agreements should be private,” Mickelson added. “Doesn’t seem to be the case, but it should be.”