Yelwa said that the trainers would in turn train 6,000 youths on various skills within the six states of Benue, Plateau, Kwara Kogi, Niger and Kebbi where HYPPADEC was operating. 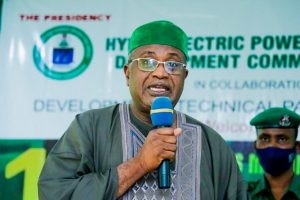 The Hydro Power Producing Areas Development Commission (HYPPADEC), says it will support 30,000 indigent Nigerians within the commission’s operation areas with palliatives to develop their businesses.
Alhaji Abubakar Yelwa, Managing Director,  HYPPADEC disclosed this on Thursday in Minna while inaugurating a three-day Training of Trainers (TOT) workshop on Youth Transformation Programme (YTP).
Yelwa said that the trainers would in turn train 6,000 youths on various skills within the six states of Benue, Plateau, Kwara Kogi, Niger and Kebbi where HYPPADEC was operating.
“In addition to the 6,000 youths that we are going to train under the YTP, anytime from the end of July this year, we are also going to support 30,000 indigent Nigerians within the HYPPADEC zone with palliatives to develop their businesses,” he said.
He said that the support, different from the YTP, would help existing businesses to develop within the 1,801 identified HYPPADEC communities in the six states.
He said the Management and Governing Council of the commission had approved the payment of N30,000 per month to each of the youth that would participate in the programme.
The managing director said the measure would help the beneficiaries to get funds to develop their businesses after the training.
He said the commission had set up committee to enable it to identify the beneficiaries in the six states.
He said that the commission was established to tackle perennial social and economic challengs bedeviling the HYPPADEC communities.
Earlier, Dr Mahamud Mohammed, Director, Community and Rural Development, HYPPADEC, said under the YTP, the commission planned to train 5,000 youths on skills acquisition but later increased it to 6,000.
Mohammed said that the figure was increased with 1,000 slots for non-indigenes resident within the HYPPADEC communities.
“The commission had received 4,342 applicants out of the 6,000 forms sent out to the benefiting youths in the six states,” he said.
Don't miss
NEWS

He said the measure was aimed at reducing poverty among the teeming youths who are unemployed.
The director said the commission identified 36 trades grouped into three categories of vocational and technical, domestic, agriculture and enterprise for the 6,000 beneficiaries.
He explained that the allocation of the trainees to the six HYPPADEC states was done accordding to a formula established by the commission on level of involvement of the states in environmental issues caused by the dams.
READ ALSO:https://brandpowerng.com/nepc-trains-women-on-packaging-rebranding-and-certification-for-export/
“The commission allocated 30 per cent to Niger state; 20 per cent to Kebbi; Kwara, 14 per cent; Benue, 14 per cent; Kogi, 14 per cent and Plateau eight per cent,” he said.
Mohammed said that the 65 trainers would step down the training to the youth for three to six months, depending on the vocation.
He said that among the trainees, graduates would be payed monthly stipend of N15,000, while non-graduates would get N10,000.
“After the training, start-up packs will be given to them to help them develop their businesses or start a new one,” he said.
Also, Dr Abubakar Fipko, Director General, National Directorate of Employment (NDE), urged the trainers and the trainees to take the exercise serious, to impact meaningfully on the teeming youths.
“The NDE will continue to support you to enable you to succeed,” he said.
Similarly, Dr Mohammed Alkali, technical collaborating partner and resource person to HYPPADEC, said that the TOT has three main areas of financial literacy training, behaviour change training and skills acquisition.
Responding on behalf of the trainers, Mr Fagbemi David, promised that they would impact the youth positively in order to take them off the streets to become self reliant.
(NAN)